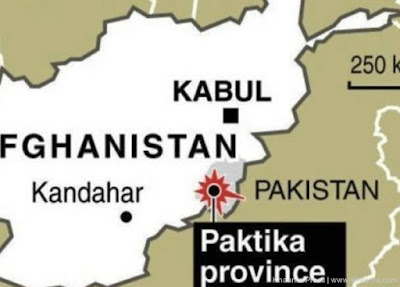 The uplifting story comes from The Long War Journal.


The US killed 15 fighters from the Movement of the Taliban in Pakistan (TTP) in an airstrike in the eastern Afghan province of Paktika earlier this week. Both the TTP and its ally, al Qaeda, have stepped up their presence in eastern Afghanistan over the past several years.

The Pakistani Taliban fighters were killed on Sept. 9 in what was said to be a drone strike in the Gomal district, which directly borders Pakistan’s Taliban-infested tribal agency of South Waziristan, according to Khaama Press. It is unclear if the CIA or the US military executed the airstrike, or if remotely piloted Predators or Reapers or conventional aircraft were used to conduct the attack. The US military operates both manned and unmanned aircraft inside Afghanistan.

Intelligence officials in the region said that the Movement of the Taliban in Pakistan fighters belonged to “the Gandapur faction,” Reuters reported. “Fifteen dead bodies of killed militants will be shifted soon to their native areas in Dera Ismail Khan,” an intelligence official told the news agency.

Dera Ismail Khan borders the tribal agency of South Waziristan, which is home to numerous Taliban groups and is used as a jump-off point for jihadists to enter Afghanistan to fight US, Coalition, and Afghan forces. The Haqqani Network, a powerful Afghan Taliban subgroup that is allied with al Qaeda, administers Paktika province and allows the Movement of the Taliban in Pakistan to operate in areas under its control.

The Movement of the Taliban in Pakistan, al Qaeda, and other jihadist groups that operate in the tribal areas have shifted some of their operations into Afghanistan as the Pakistani government began targeting the so-called “bad Taliban,” or groups that overtly threaten the state, in North Waziristan. The Pakistani military has not targeted the “good Taliban,” such as the Haqqani Network, as they are considered to be assets to the state.

The US has targeted and killed dozens of Pakistani Taliban fighters in eastern Afghanistan since the Pakistani military launched its offensive in June 2014. On Aug. 24, 2012, the US killed Mullah Dadullah (a.k.a. Maulana Mohammad Jamal), his deputy, Shakir, and 10 Taliban fighters in an airstrike in the Shigal wa Sheltan district in Kunar province.

Mullah Fazullah, the emir of the Movement of the Taliban in Pakistan, and several senior leaders and military commanders were the target of at least three US airstrikes in the eastern province of Nangarhar in late November and early December. At least eight commanders and two fighters were reported killed in the strikes. [See LWJ report, US airstrikes in eastern Afghanistan target Pakistani Taliban.]

Obama administration officials, military commanders, and intelligence officials have downplayed or largely ignored the presence of the TTP, al Qaeda, and other jihadist groups that are operating in Afghanistan. For years, US officials have insisted that al Qaeda maintains a token presence of no more than 50 to 100 operatives in the country and that it is disconnected from the Taliban.

However, eastern Afghanistan has become a safe haven for al al Qaeda, especially since the US began withdrawing the bulk of its forces in 2011. Evidence of this presence can be seen in the US targeting of al Qaeda leaders there. In December 2013, the US killed two al Qaeda military commanders, three members of the Movement of the Taliban in Pakistan, and two members of the Afghan Taliban in an airstrike in the Lal Pur district in Nangarhar. The two al Qaeda commanders were associates of Ilyas Kashmiri, the renowned Pakistani jihadist who was a top military leader in al Qaeda before he was killed in a US drone strike in South Waziristan in June 2011.

In October 2014, the US killed al Qaeda leader Abu Bara al Kuwaiti in an airstrike in Nangarhar’s Nazyan district. He was at the home of Abdul Samad Khanjari, an al Qaeda military commander who doubled as the Taliban’s shadow governor for the Achin district in Nangarhar. Afghanistan’s National Security Directorate said that Abu Bara “had close relations with the family of Ayman al Zawahiri,” al Qaeda’s emir. He was likely a member of al Qaeda’s General Command and known to be a “student” and “comrade” of Atiyah Abd al Rahman, al Qaeda’s former general manager (also known as Atiyah Allah), who was killed in a US drone strike in Pakistan in August 2011. Abu Bara wrote Atiyah’s eulogy, which was published in Vanguards of Khorasan, al Qaeda’s official magazine.

And just two months ago, the US killed Abu Khalil al Sudani, a senior al Qaeda leader who took direction from Ayman al Zawahiri, in an airstrike in the Bermal district in Paktika province. Sudani had a hand in al Qaeda’s external operations network, which plots attacks against the US and the West. Sudani’s role in al Qaeda is discussed in several of the declassified files recovered in Osama bin Laden’s compound in Abbottabad, Pakistan.

The presence of Kuwaiti and Sudani in eastern Afghanistan is a clear indication that Osama bin Laden’s directive to relocate some of its top leaders from Pakistan has been heeded. In a letter dated October 21, 2010, bin Laden told Rahman that al Qaeda should relocate as many “brothers” as possible to the eastern Afghan provinces of Nuristan, Kunar, Ghazni, and Zabul to avoid the US drone campaign in North and South Waziristan. [See LWJ reports, Bin Laden advised relocation of some leaders to Afghanistan due to drone strikes in Waziristan.]