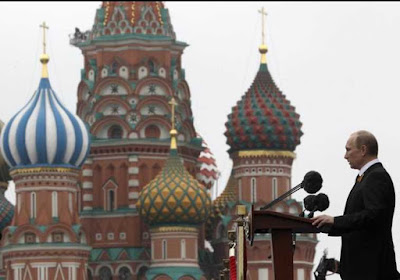 Russia has gone all in when it comes to the defense of Syria with rumored military bases there under construction and now word is leaked that the Russians have sent the SA-22 anti-aircraft missile system to Syria.  Now, I find it odd that an anti-AIRCRAFT system is on its way when it's obvious that the one missing link in ISIS' attack on Assad's forces is any kind of military aircraft but I guess that's a question for Vladimir Putin.


Moscow is sending an advanced anti-aircraft missile system to Syria, two Western officials and a Russian source said, as part of what the West believes is stepped-up military support for embattled President Bashar Assad.

The Western officials said the SA-22 system would be operated by Russian troops, rather than Syrians. It was on its way to Syria but had not yet arrived.

"This system is the advanced version used by Russia and it's meant to be operated by Russians in Syria," said one of the sources, a Western diplomat who is regularly briefed on US, Israeli and other intelligence assessments.

A US official separately confirmed the information.

The Russian source, who is close to the Russian navy, said the delivery would not be the first time Moscow had sent the SA-22 system, known as Pantsir-S1 in Russian, to Syria. It had been sent in 2013, the source said.

"There are plans now to send a new set," the source said, without detailing how far along the process was.

However, the Western diplomat said the version of the SA-22 on its way to Syria was newer than previous missile systems deployed there.

The United States has been leading a campaign of air strikes in Syrian air space for a year, joined by aircraft from European and regional allies including Britain, France, Jordan and Turkey. US forces operating in the area are concerned about the potential introduction of the weapon, the diplomat said.

US officials say they believe Moscow has been sending troops and equipment to Syria, although they say Russia's intentions are not clear.

Lebanese sources have told Reuters that Russian troops have begun participating in combat operations on behalf of the Assad government. Moscow has not commented on those reports.

Speaking at a news conference in Moscow, Russian Foreign Minister Sergei Lavrov said Russia was sending military equipment to Syria to help the Assad government combat Islamic State fighters, and had sent experts to help train the Syrian army to use it.

However, the dispatch of advanced anti-aircraft missiles would appear to undermine that justification, since neither Islamic State nor any other Syrian rebel group possesses any aircraft.

Lavrov also said coordination was needed between Russia's military and the Pentagon to avoid "unintended incidents" around Syria. Russia was conducting pre-planned naval drills in the eastern Mediterranean, he said.

This year has seen momentum shift against Assad's government in Syria's 4-year-old civil war, which has killed 250,000 people and driven around half of Syria's 23 million people from their homes.

An ally of Damascus since the Cold War, Moscow maintains its only Mediterranean naval base at Tartous on the Syrian coast, and protecting it would be a strategic objective.

Recent months have also seen talk of a new role for outside forces in Syria, with NATO-member Turkey proposing the creation of a "safe zone" free from both Islamic State and government forces near its Syrian border.

Even if Russians operated the missiles and kept them out of the hands of the Syrian army, the arrival of such an advanced anti-aircraft system could also unsettle Israel, which in the past has bombed sophisticated arms it suspected were being handed to Assad's Lebanese guerrilla allies, Hezbollah.

"In the Middle East you never know what will happen. If the Russians end up handing it (SA-22) over to the Syrian military I don't think the Israelis would intervene but they would go bananas if they see it heading towards Hezbollah in Lebanon," the diplomatic source said.

An Israeli military spokesman declined to comment on the missile system. A senior Israeli defense official briefing reporters on Thursday said Israel was in contact with Moscow and would continue its policy of stopping advanced weapons reaching Hezbollah.

"We have open relations with the Russians who have come to save Assad in the civil war. Along with this, we will not allow our sovereignty to be compromised or the transfer of advanced or chemical weapons [to Hezbollah]. We are following the developments and keeping open channels with Moscow."

The Russian installations, aircraft, etc., need the SA-22, why would Russia leave them unprotected from the air? Anyone surprised by this move will be shocked to see the sun rise in the East.