From the WTF Files: Egypt forces kill 12 Mexican tourists, mistaking them for militants 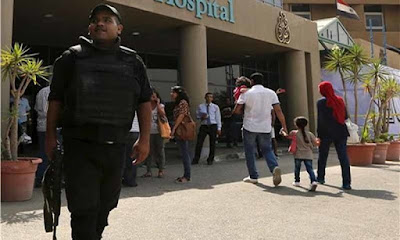 Yeah, this is a story you don't see everyday.

It did not give a casualties breakdown, but said “the incident led to the death of 12 Mexicans and Egyptians and the wounding of 10 others”.

It said the tourists had been in an “off-limits” area, but did not give an exact location.

Mexican tourists who survived the mistaken attack were bombed by military helicopters and an aircraft while they stopped for a break in the desert.

The group had arrived in Cairo on September 11 and left two days later on their way to the Bahariya oasis, Ruiz Massieu said.

She said six Mexican survivors told Mexico's ambassador to Cairo that they had stopped for a meal when they “suffered an aerial attack with bombs launched by a plane and helicopters".

Ruiz Massieu said Mexico had expressed its “deep dismay over these deplorable events” in a diplomatic note to Cairo's ambassador, demanding a “swift, exhaustive and deep investigation”.

She said Egypt had pledged to create an investigative committee into the incident that would be headed by the prime minister.

In a tweet earlier, Mexican President Enrique Pena Nieto had demanded “an exhaustive investigation about what happened" from the government of Egypt.

Mexican media identified one of the dead as 40-year-old musician Rafael Jose Bejarano Rangel, whose mother, Marisela Rangel, was wounded.

Her sister, Araceli Rangel Davalos, told Milenio television that Marisela was in a stable condition but that they have not yet been able to talk.

The incident was likely to raise further concerns for Egypt's vital tourism industry, which has struggled to recover from years of political and economic chaos.

Mexico's envoy in Cairo had visited wounded nationals in the city's Dar al-Fouad Hospital where they were listed in stable condition, the foreign ministry in Mexico City said.
Militant hideout

The Western Desert, a popular destination for tour groups, extends from the suburbs of Cairo to the border with Libya.

A senior tourism ministry official told AFP the incident happened as the tourists were travelling between Cairo and the Bahariya oasis, about 350 kilometres southwest of the capital.

A police source said special forces were on Sunday carrying out an operation involving air support about 150 kilometres west of Bahariya.

The desert is also a militant hideout, and Western embassies have long warned against non-essential travel to the area.

Last month, Egypt's branch of the Islamic State group beheaded a young Croatian there who was working for a French company, and IS has also attacked security forces there several times.

IS in Egypt said in a statement that it had “resisted a military operation in the Western Desert” on Sunday, but gave no other details.

Egypt has been struggling to quell a militant insurgency since the military overthrew Islamist president Mohamed Morsi in 2013, focused mainly on their primary holdout in the Sinai Peninsula in the east.

The country has one of the region's most powerful and well-equipped militaries, and was further boosted by recent deliveries of F-16 warplanes by Washington and Rafale fighters from France.
Militant tactics

Last week, the army launched an anti-IS operation in the Sinai which it said killed 56 militants.

The army often reports large death tolls among the insurgents but they are impossible to verify and there has been little noticeable effect on IS's ability to stage attacks.

The government says hundreds of police and soldiers have been killed, many in attacks claimed by IS's Sinai Province affiliate.

After launching spectacular attacks targeting security forces in its North Sinai bastion over the past two years, militants are increasingly adopting tactics similar to the main IS group in Iraq and Syria.

In July, the group claimed the bombing of the Italian consulate in Cairo in which one civilian was killed, and it also claimed the killing of an American employee of oil company Apache last year in the Western Desert.

The beheading in July of Croatian engineer Tomislav Salopek, claimed by IS, appeared aimed at scaring off tourists and foreign employees of Western firms - two cornerstones of an economy battered by years of unrest since the 2011 uprising that ousted Hosni Mubarak.

Posted by Holger Awakens at 3:31 AM

WTF are tourists doing in a live fire zone, i.e., that part of the world? If you just gotta see it go via Google Earth.