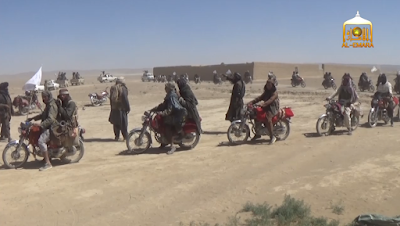 The Taliban are moving deliberately in their quest to regain Afghanistan.  They have made serious strides in the North, they are engaged in the South and as it appears, the Eastern front is next on the list.  It's my guess that America's new President in 2017 will be welcomed by the new Taliban-run Afghanistan with its countless terrorist camps and a renewed mission to destroy America.

Thanks Barry.  Yet again.

As the Taliban mounts offensives in the northern province of Kunduz and the southern province of Helmand, it has also been consolidating its grip on areas in eastern Afghanistan. A video from Paktika province, a bastion of the Haqqani Network, shows the Taliban in control of a military outpost along the Pakistani border.

The Taliban released a video entitled “Liberation of Ghwasta” that shows scores of its fighters attacking and then walking inside a US-built outpost in the Waza Khwa district in Paktika. The footage was released on Voice of Jihad, the jihadist group’s official propaganda website, on Sept. 21. The exact date of the attack was not given, but the accompanying statement said that it occurred “a few weeks earlier.”

According to the Taliban, the Ghwasta area of the district “was cleared from the hireling troops after dozens were killed and wounded, many vehicles destroyed and a sizable amount of arms and ammunition seized.”

The video does show the jihadists in possession of captured vehicles, including a US-made Humvee, and a large quantity of weapons, rockets, mortars, ammunition, and other supplies (screen shots from the video are below). The Taliban does not show the bodies of Afghan soldiers or policemen who were purportedly killed in the battle.

Also included in the footage is an interview with Mawlawi Muhammad Iqbal, AKA Takal, the “deputy provincial governor,” or deputy shadow governor, for Paktika. Iqbal is on the scene with the Taliban in Waza Khwa district.

The Taliban’s shadow governor for the province is Bilal Fateh, who swore allegiance to Mullah Mohammad Mansour, the new emir, in early August. The Taliban previously identified the deputy shadow governor of Paktika as “Abdullah” and “Hamad.” In a December 2013 interview, Abdullah claimed that the districts of Dila, Nika, and “Charbaran,” which may be a reference to Gomal district (the Charbaran Valley is in Gomal), are under the jihadist group’s control.

The exact security status of Paktika is unclear. The Afghan government has claimed that the Taliban only controls four of the more than 400 districts in the entire country, but the Taliban are known to control far more than that number. In Paktika, the districts of Bermal, Dila, Nika, Urgun, Yahya Khel, Waza Khwa, Yusuf Khel, and Ziruk are thought to be heavily contested or under Taliban control. The Afghan government often only maintains its writ in the district centers but not in the rural areas of the country.

The Waza Khwa district borders Pakistan’s Baluchistan province, where the Afghan Taliban wields considerable influence. The cities of Zhob and Qila Saifullah, where the jihadist group runs madrassas, recruiting centers, training camps, and command centers, are within 50 miles of the district.

Paktika province is also a stronghold of the Haqqani Network, a powerful subgroup that wields considerable influence within the Taliban. Jalaluddin Haqqani, the group’s founder, is a member of the Taliban’s Quetta Shura, while Sirajuddin Haqqani is one of Mansour’s two deputy emirs.

The Haqqanis maintain close ties with al Qaeda and shelter the global jihadist group’s top leaders in Paktika to this day. At the end of July 2015, the US killed Abu Khalil al Sudani, a senior al Qaeda leader who took direction from Ayman al Zawahiri, in an airstrike in Paktika’s Bermal district. Sudani had a hand in al Qaeda’s external operations network, which plots attacks against the US and the West. On Sept. 14, Afghan intelligence said that it killed an al Qaeda commander known as as Khuram in the Gomal district.