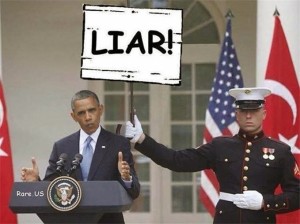 There is no possible way I can improve on this post from yesterday over at Sondrakistan.

By any measure, President Obama’s effort to train a Syrian opposition army to fight the Islamic State on the ground has been an abysmal failure. The military acknowledged this week that just four or five American-trained fighters are actually fighting.

But the White House says it is not to blame. The finger, it says, should be pointed not at Mr. Obama but at those who pressed him to attempt training Syrian rebels in the first place — a group that, in addition to congressional Republicans, happened to include former Secretary of State Hillary Rodham Clinton.

At briefings this week after the disclosure of the paltry results, Josh Earnest, the White House press secretary, repeatedly noted that Mr. Obama always had been a skeptic of training Syrian rebels. The military was correct in concluding that “this was a more difficult endeavor than we assumed and that we need to make some changes to that program,” Mr. Earnest said. “But I think it’s also time for our critics to ‘fess up in this regard as well. They were wrong.”

In effect, Mr. Obama is arguing that he reluctantly went along with those who said it was the way to combat the Islamic State, but that he never wanted to do it and has now has been vindicated in his original judgment.

Thanks for the link, ol' son.
Yeah, the narcissism of this jackass is clinical.

Here's more of how bad it is. According to The Telegraph, a division of US-trained rebels surrendered upon re-entering Syria.

Thanks for stopping by, sir!