Oh the Horror! The Rolling Stones Will Play a Concert In Israel!! Pro-Palestinian Tools Express OUTRAGE! 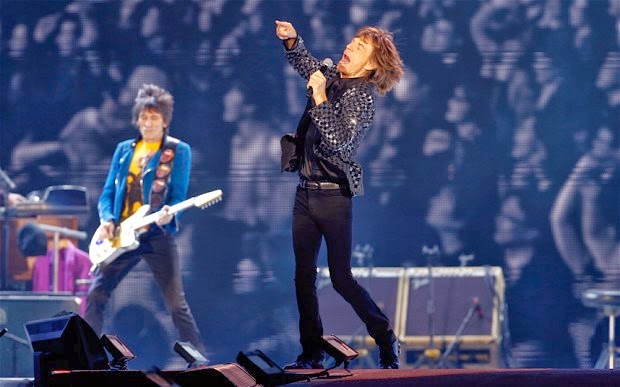 Can you imagine?  The Rolling Stones actually have the nerve to play a concert inside of the nation of Israel???!!!!  OMG.  What an outrage!  If only the Rolling Stones would change their venue to Gaza...they could be there for the training of teenage boys in Gaza for their missions to don suicide bomb belts and blow up little Israeli babies - now THAT would be acceptable.


Pro-Palestinian campaigners calling on Rolling Stones to cancel concert in Israel, claiming the band is allowing itself to become a "publicity tool".


The Rolling Stones were urged on Tuesday to abandon plans to perform in Israel after concluding a lucrative deal to play their first ever concert in the Jewish state.

Palestinians campaigners backing a cultural boycott of Israel said the band were being used as a "publicity tool" to "whitewash apartheid" by the Israeli government following confirmation that it would play before 55,000 fans in Tel Aviv's Hayarkon Park arena on June 4.

Details of the concert were disclosed by Shuki Weiss, an Israeli promoter, who hailed it as "a historic moment".

"I have no words to describe the enormity of this event," said Mr Weiss, who is reported to have paid the group between £2.4 million and £3 million for the concert. "It's a huge honor to bring the Rolling Stones to Israel, an honor for the country, the citizens, and mostly for the fans who have waited for this moment."

The announcement, which has been rumoured for weeks, came eight days after the suicide of L'Wren Scott, girfriend of Mick Jagger, the group's singer. It seemed certain to trigger a scramble for tickets, which go on sale online on Thursday at prices ranging from £120 to £495.

But it provoked a furious response from the Boycott, Divestment, Sanctions movement (BDS), which warned that the band would "go down in history as one of the few artists willing to perform in Israel despite its system of occupation, colonisation and apartheid".

"We urge the Rolling Stones to refrain from playing in apartheid Israel and not to condone Israel's violations of international law and human rights against the Palestinian people," said Rafeef Ziadah, a BDS spokesman. She said the concert would serve Israel's "campaign to rebrand itself and will be used as a publicity tool by the Israeli government".

BDS has consistently pressed international artists and academics to boycott Israel in protest at its occupation of Palestinian territories.

Roger Waters, the former Pink Floyd frontman who is the organisation's best-known member, last year wrote an open letter to fellow musicians urging them not to perform in Israel. He also wrote to Scarlett Johansson, the Holywood actress, condemning her recent decision to abandon her role as an Oxfam ambassador and instead advertise for SodaStream, an Israeli drinks company that has a factory in the occupied West Bank.

Some high profile acts, including Annie Lennox and Elvis Costello, have said they will not play in Israel, while Stevie Wonder, the American singer, abandoned plans for a concert following a plea from Mr Waters. Other stars, including Madonna and Sir Paul McCartney, have defied the boycott calls and staged concerts in Israel.

Asked if Mr Waters would be contacting the Rolling Stones, Ms Ziadah said in an emailed response: " We will be working with all of our supporters to urge the Rolling Stones to abandon this ill-advised concert."

Posted by Holger Awakens at 2:53 AM

So where in the Middle East would they have enough money to attend an overpriced Stones concert? Let me see. Uh. Maybe the only stable capitalist country in the cesspool?