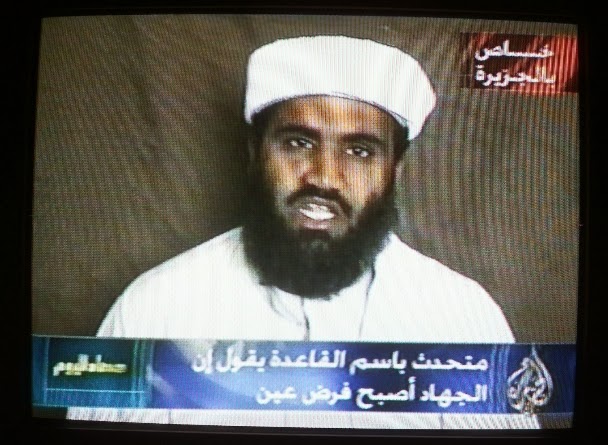 Convicted.  Hang him in the town square but not with rope but the large intestine of a hog.

Evidence presented during the three-week trial included a screen shot of a video from September 12, 2001 showing Abu Ghayth sitting beside Osama bin Laden and other al-Qaida members, including Ayman al-Zawahiri, the current leader of the terrorist group. A videotaped statement broadcast a month later on al-Jazeera showed Abu Ghayth saying "there are thousands of Muslim youths who are eager to die and that the aircraft storm will not stop." He warned "Muslims in the United States and Britain, the children, and those who reject unjust U.S. policy not to travel by plane."

Abu Ghayth testified about being summoned by bin Laden to an Afghanistan mountain cave just hours after the 9/11 attacks. Bin Laden acknowledged al-Qaida's responsibility and sought Abu Ghayth's help "to deliver a message to the world."

Abu Ghayth, who was married to bin Laden's daughter, was captured and brought to the United States last year, where he was indicted on terrorism-related charges. He was convicted on three counts related to a conspiracy to kill Americans, to provide material support to terrorist and providing actual support. He faces a maximum of life in prison for the first count and a maximum of 15 years for the latter two counts.

"He was more than just Usama bin Laden's propaganda minister," Manhattan U.S. Attorney Preet Bharara said in a Justice Department press release. "Within hours after the devastating 9/11 attacks, Abu Ghayth was using his position in al Qaeda's homicidal hierarchy to persuade others to pledge themselves to al Qaeda in the cause of murdering more Americans."

Posted by Holger Awakens at 1:56 AM