"The Cops Amaze Me" 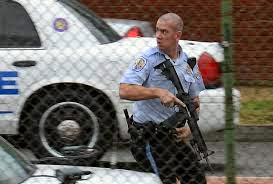 
The Cops Amaze Me

The cops amaze me.
Some days I honestly don’t know how they do it.
Like yesterday, at the Navy Yard.
We know about the bad guy, we know about his military record and his criminal record. And we know what he did.
But we don’t know much about how he came to stop doing what he was doing.
We don’t know much about how they took him down.
But what we do know is impressive.
Which gets back to the cops.
Yesterday morning about 8:20, the first 9-1-1 call came in of trouble in Building 197. Moments later, an alert was broadcast and officers began speeding toward the Navy Yard from across the District of Columbia.
Regular patrol officers.
Some from schools, some from speed-enforcement details, all from the first hour a new shift and a new week. Old, young, male, female, black, white. They just came. Primarily from the Metropolitan Police Department and the Federal Park Police.
Officers whose lives were going from zero to 60 in the blink of an eye. Officers who went from the sleepy good morning of a Monday dawn to the real-world battlefield of an active shooter.
They began to arrive almost immediately.
And quickly formed up into an assault team.
They didn’t wait for the SWAT team. They didn’t stand back and wait for the armored personnel carrier. They formed up and went in.
Specifically, seven minutes after the first call, an ad hoc team of park police and district police with AR-15s ran into the building in their patrol uniforms.
They ran to the sound of the gunfire.
They closed with the enemy, and engaged him, and killed him.
And by every account some 10 minutes after the first word of trouble had breathed across the police radio, regular patrol officers had killed the gunman and ended his assault.
He fought the law, and the law won.
It’s impossible to calculate how many lives that saved. It’s impossible to calculate how much expertise that took.
It’s impossible to grasp the mindset of readiness that must permeate the men and women of law enforcement. Without notice, the police can be thrown into life-and-death situations where every second and every decision counts.
And sometimes, like yesterday, they must operate in an environment that is heartbreaking and troubling. The responding officers at the Navy Yard ran past the dead and dying, their blood pooling where they lay, in order to press their attack against a monster.
And that was just yesterday.
Every day it is different, every call it is different. Sometimes they are comforting heartbroken children, other times they are knocking on the door to inform someone of the death of a relative. Sometimes they are spat upon, other times they are vomited upon. They are hated and loved, cursed and praised, sometimes on the same call.
They see the carnage of the highways, the sorrow of abused and neglected children, the collapse of a battered wife. They talk the despondent off bridges, they catch the drunk drivers, they try to mediate family and neighbor disputes.
And half the time they do it while being cussed by one group or another. Maybe it’s the neighborhood people. Maybe it’s the pastors. Maybe it’s an activist with a cell-phone video.
The politicians trash them, the residents trash them, the police brass trashes them. They’re ready to lay down their lives for strangers, but heaven help them if anybody thinks they were impolite to a citizen. Heaven help them if they disrespected somebody’s culture.
They fight crime all day, every day, and usually it is a pretty low-key affair. Until there’s a glint of sunlight or a stumbling drunk or a dispatch on the radio.
That’s when it’s Superman time.
That’s when the next 10 minutes of your life are going to be some of the most important in your life.
Like yesterday at the Navy Yard.
Across a big city, the routine of the morning worked its way out. Until there was a cry for help, and the sirens began to roar, and a crew of men and women from at least a couple of departments ran toward the danger.
And killed it.
Before he could kill anybody else.
The cops amaze me.

Posted by Holger Awakens at 2:43 PM