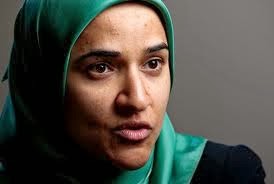 The circle around Barack Hussein Obama - it's FILLED with the worst that Islam has to offer in this country and more and more of them are capitalizing on their connection to the President to provide cover for their anti-Semitic, anti-Christian views - their terror is now becoming mainstream...all because of a Muslim-leaning administration.

The story comes from The Investigative Project on Terrorism.

Nonetheless, Mogahed pointed the finger at the Egyptian media.

"The Egyptian media took advantage of the Copts to achieve many personal/political gains, which has angered the West," Mogahed said in a Sept. 22 post which appeared on the Facebook page of the Egyptian Americans for Democracy and Human Rights (EADHR).

The EADHR was founded by members of the Muslim American Society (MAS), which in turn was founded as an "overt arm" of the Egyptian Brotherhood.

Mogahed isn't the only American Islamist tied to the Obama administration to slam the Copts on social media.

In earlier tweets, Elibiary attacked American Copts for protesting against how their relatives in Egypt have been treated by the Islamists.

"Good read by @mwhanna1 on need to reform #Coptic activism in #US including stop promoting #Islamophobia," Elibiary wrote Sept. 14.

Brotherhood groups in the United States and their supporters are lashing out at the Copts, who have been among the Muslim Brotherhood's visceral critics, and dismiss their grievances as mere bigotry. Meunier charged that the Brotherhood is trying to slander the Copts to reduce their effectiveness.

"The Copts have nothing to be ashamed of. Morsi made the Copts' lives' hell, so they got together with the moderate Muslims to overthrow Morsi," Meunier said. "The Muslim Brotherhood victimized the Copts, and now it wants to blame them."

Posted by Holger Awakens at 1:12 PM