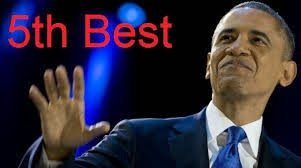 Obama is the Fifth Best President
in the History of the U.S. Of the total of 44 US Presidents:
Obama rated 5th Best President ever.
The Democratic publicity release said,"...after a little more than 4 years,
Americans have rated President Obama the 5th best president ever."
The details according to White House Publicists..:
* Reagan, Washington, Jefferson, Lincoln and 6 others tied for first,
* 15 presidents tied for second,
* 17 other presidents tied for third,
* Jimmy Carter came in 4th, and
* Obama came in Fifth