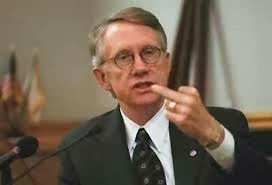 "But at a time when our discourse has become so sharply polarized, at a time when we are far too eager to lay the blame for all that ails the world at the feet of those who happen to think differently than we do, it's important for us to pause for a moment and make sure that we're talking with each other in a way that -- that heals, not in a way that wounds." - Barack Hussein Obama, January 13th, 2011


" But the American people will not be extorted by Tea Party anarchists." - Harry Reid, September 28th, 2013

"With a bully, you cannot let them slap you around because today they slap you five or six times," Senate Majority Leader Harry Reid (D-Nev.) told reporters. "Tomorrow it's seven or eight times. We are not going to be bullied." - Harry Reid, September 30th, 2013

"So it’s a shame that instead of focusing on the middle class, our colleagues in the House are obsessed with appeasing the tea party.” - Harry Reid, July 23rd, 2013