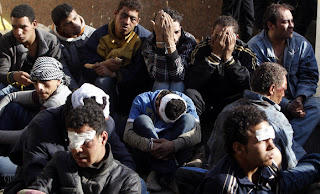 The story comes from Radical Islam.


Last Friday, Islamists took over the Bilal Ibn Rabah Mosque in Cairo and turned it into a torture house for anti-Muslim Brotherhood protesters. One Coptic Christian victim, Amir Ayad, almost died. This comes shortly after RadicalIslam.org’s report about the formation of Islamist militias to crack down on the opposition.

Mosque officials said that “members of the Islamist current” forcibly took over their facility after Friday prayers. They condemned the violence and the use of mosques for political matters. Similarly, the imam of Al-Kabir Mosque in Sharqiya said he was assaulted because he refused to preach in support of a “certain current” and that other imams are also being pressured.

Amir Ayad said he was detained and transported from the Muslim Brotherhood headquarters to the seized mosque and beaten with sticks for hours. He saw other protesters, Christian and Muslim, also being abused. Ayad was abandoned by his torturers as he barely held onto his life. His life was saved when his brother received an anonymous phone call and brought him to an ambulance.

In a similar development, a church in Kom Ombo was firebombed and local Islamists rioted in response to a false rumor that a Muslim woman was forced to convert to Christianity.

Violence carried out by pro-Islamist activists against anti-Islamist demonstrators is increasing with around 200 injuries last Friday (3.22.13). The Muslim Brotherhood’s English-language website, IkhwanWeb, depicts the clashes as “mindless savagery against the Muslim Brotherhood” and blames the opposition for instigating “thugs, Black Bloc militias.” It also accused protesters of having “terrorized seven young ladies.”

President Morsi is signaling that he will take new aggressive measures to put an end to the demonstrations. He is threatening legal actions if “certain political figures are implicated.” He also said that the opposition is manipulating the media, portending future limits on the press. As RadicalIslam.org has documented the Muslim Brotherhood is working to infiltrate and shut down the independent media.

In addition, the Muslim Brotherhood and Jama’a al-Islamiya have also agreed to set up an Islamist “civilian” force to apprehend opponents.

The fact that Ayad was transferred from the Muslim Brotherhood headquarters to the mosque-turned-torture-chamber proves some level of Brotherhood complicity in the torture.

The Brotherhood presents itself as a protector of Christians, but as RadicalIslam.org has reported Muslim Brotherhood thugs have beaten and tortured Christian Copts.

Wagdy Ghoneim, a Muslim Brotherhood cleric that spoke at Morsi’s rallies during the presidential campaign, said, “if you [Christians] conspire and unite with the remnants [opposition] to bring Morsi down, that will be another matter…our red line is the legitimacy of Dr. Mohammed Morsi. Whoever splashes water on it, we will splash blood on him.”

At the same time, there is much uncertainty about the upcoming parliamentary elections that could be a major defeat for the Islamists if the vote is fair and the opposition National Salvation Front remains united. The elections were originally planned for April, but a court ruled against it. Morsi says he expects them to be held in October.

In the meantime, Morsi is free to enjoy his status as the "new Pharoah" since he’s declared that his decisions are final until a new parliament is in place. The longer the elections are delayed, the longer he has to solidify the Brotherhood’s grip and defang the opposition.

What has unfolded in Egypt proves that U.S. intelligence was mistaken in its understanding of the Muslim Brotherhood. U.S. Director of National Intelligence James Clapper said in February 2011 that the Muslim Brotherhood is a “very heterogeneous group, largely secular, which has eschewed violence and has described Al-Qaeda as a perversion of Islam.” In January 2012, he again referred to the Brotherhood as a “moderate Islamist” group that can “compete” with Al-Qaeda.

In 2011, the Washington Post reported, “An internal assessment, ordered by the White House last month, identified large ideological differences between such movements as the Muslim Brotherhood in Egypt and al-Qaeda that will guide the U.S. approach to the region.”

The rising violence and human rights abuses against women and non-Muslims in Egypt should serve as a lesson about supporting self-described "moderate Islamists" as the solution to “extreme Islamists."