Why The U.S. Cannot Pull Out Of Afghanistan 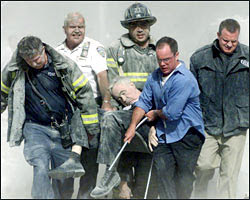 Okay, this is strictly Holger stuff here folks...you won't find one single link in this posting. The internet, the MSM, the neighborhoods are buzzing with talk of the War in Afghanistan now...and much of that buzz has to do with whether we should just pull out of the war altogether. Some are anti-war pansies who wouldn't fight a war if America was under attack and some are just isolationists but I want to address those that have now come out of the conservative side, mostly...those that are obviously aware of Barack Hussein Obama's mishandling of the war and have gotten to the point where they are putting this forth:

"If we aren't going to fight this war right, then we might as well just pull out of it!"

Those are the people I want to address with this because I really don't think they have forgotten. Forgotten WHY the hell we are in Afghanistan to begin with.

When the smoke and dust of 9/11 cleared and we found over 3,000 dead Americans as the result, it didn't take long to determine that this was the act of al Qaeda and masterminded by Osama bin Laden's minions. Osama bin Laden even admitted to the attacks. So, President George W. Bush communicated to the Taliban in Afghanistan that the U.S. demanded they turn over bin Laden and his gang and if they didn't, we'd come to get him and lay the Taliban in ruin along the way. The Taliban refused to serve up bin Laden. So, the U.S. AND DOZENS OF OTHER COUNTRIES formed a coalition to dismantle the Taliban and try to find al Qaeda's leadership.

What was discovered in Afghanistan at that time was dozens if not hundreds of al Qaeda training camps and the realization that bin Laden had put together many planning sessions in his remote hideway in Afghanistan - this is where the planning of 9/11 was spawned.

So, the operation that became the War in Afghanistan was approved by Congress and joined by countless Western countries set out to do three things:

1. Capture and/or kill Osama bin Laden and al Qaeda leadership
2. Remove the Taliban from power in Afghanistan
3. Ensure that al Qaeda would never again be able to set up their training camps and leadership network in Afghanistan again.

There's your cliff notes of the history as to just why we are involved in this war.

Okay, so today what do we know of the situation and the status of the goals of the War in Afghanistan?

1. Bin Laden and most of the al Qaeda leadership left Afghanistan for Pakistan
2. The Taliban were removed from power in Afghanistan
3. Al Qaeda training camps and planning sessions in Afghanistan were destroyed
4. The Taliban did NOT leave Afghanistan - they remained in the country and continued a counter attack campaign against U.S. and NATO forces

WHY WE CANNOT WITHDRAW

If you look back to the goals of the War in Afghanistan, #3 states that we must ensure that al Qaeda not return to Afghanistan and reestablish the terror camps and networking that got us into the war to begin with. So, I ask you this very critical question:

"If we withdraw from Afghanistan, how long will it be before the Taliban regain power in the country and how long after that will al Qaeda leadership and training camps be back in place?"

At this point in time, I only wish I could grasp the shoulders of one of the withdrawl advocates and look him straight in the eye and simply scream out that if we leave that country of Afghanistan, America will face a renewed Taliban-run Afghanistan and an al Qaeda stronghold the likes we have never known before. It would be the "Mecca" of the East for jihadis.

And the bottom line is this...if we withdraw from Afghanistan, America and western Europe will face 9/11-type attacks year after year after year. There's a fucking reason we have not had another major islamic terror attack in America in 8 years and it's NOT because we've trained out airport security people to look out for box cutters. It's because we totally disrupted al Qaeda and decimated the support they had in the Taliban. We sent bin Laden to a cave in one corner of Pakistan and Mullah Omar to another. We put the terrorists in the mode of staying alive rather than creating death.

And now, my friends on the Right in America, want to withdraw from Afghanistan because we have a piece of shit Commander-in-Chief. Well, no one and i mean NO ONE has to tell me about the sacrifices we are experiencing in Afghanistan - I have blogged about this war for two years and I've read hundreds of articles about our fallen heroes and I have shed more tears than anyone will ever know. But goddammit, we went to Afghanistan to avenge our dead American brothers and sisters, and to protect those that were left behind and we need to stay and make sure it is done.

We can force Obama to fight this war the right way or we can see it that he is removed from office if he doesn't, but to cut and run is NOT AN OPTION.
Posted by Holger Awakens at 3:51 PM

I am not about pulling out, I am for winning this damned war and at the same time to turn the country over to a legitimate Afghan government. I realize the cost involved. We will have to maintain a strong force there for 20 YEARS. It will take that long to build enough schools and what not to just get these people out of the dirt. I have seen some of the videos of our afghan allies... they have a long way to go before they will even have a chance on their own. But that is neither here nor there, we need much more troops there NOW, not 3 weeks, 3 months or next year. We should not be cowering in the cities there, (that's Nato's job) we should be hunting them down and killing the taliwackers while they are reeling from the paki's. But, if the goal is not victory which includes a viable government then what ?

"We put the terrorists in the mode of staying alive rather than creating death."

The above sums it up. I also do not think they have "forgotten." So, how do we explain it? The answer isn't pretty.

There is a new book I read about today and wonder if you know anything about it. The author is ANONYMOUS, and it has a forward by a Colonel Gerald Schumacher. The name is Beast 85.

It is about a team of Special Forces and it details why we do not have bin Laden - thus the "Anonymous" author.

Duh, the book is from 2005, but I read it about on a current post somewhere today.

Excellent comment - you make tremendous points. I think the goal of ensuring that al Qaeda cannot return and the Taliban are gone alludes to a viable government...but what America needs is a President that will call Karzai over to the White House, sit him down and tell him to his face that we will see to it that the Taliban are obliterated and in that effort, Afghan civilians will die. War is hell.

Thanks for the links and for stopping by.

Obama has claimed a strategy of killing bin Laden. He really doesn't care if we kill or capture bin Laden or Zawahiri, but it made him look somewhat tough in the campaign. But it shows how clueless he is in this fight against terror.