by Maggie at Maggie's Notebook

African Bishops meeting in the Vatican believe Barack Obama is part of a "divine" plan, God's "divine" plan. Archbishop Gabriel Charles Palmer-Buckle of Ghana compares Obama to the Old Testament's Joseph. A question not asked: is abortion a part of God's divine plan? 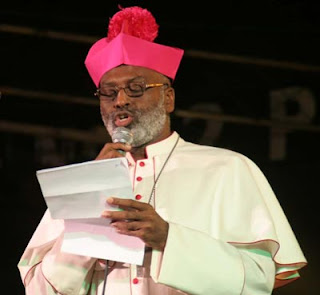 "It's like the biblical story repeating itself," he told reporters, citing the Old Testament figure, Joseph, who after being sold into slavery in Egypt ends up becoming a top official.


"God directs history," said Archbishop Gabriel Charles Palmer-Buckle. God did not, however, direct Palmer-Buckle to speak out against the Obama administration's support of abortion - or maybe He did, and the Archbishop didn't listen. Palmer-Buckle says he and his peers are aware of the controversy in the U.S. over the right-to-life issue, but nevertheless, (and I can hear him intone this):


But we feel it our duty to meet him and find out what are the things that unite us more than divide us."


How can leader in the Catholic church identify a divine mission in the efforts of Barack Obama? The answer is, it's all about being black.

A black president, a black pope in the future - it's all a:


"divine sign and a sign from the Holy Spirit for the reconciliation of races and ethnic groups for peaceful relations...," said Monsignor Laurnet Monsengwo Pasinya of the Congo.


I agree with that statement. I see America's election of a black man or woman as a wonderful step for our country...but not this particular black man.

Archbishop John Onaiyekan of Nigeria had a different take on the importance of Barack Obama:


"Obama has the authority to talk straight to our bad leaders and tell them they are messing up our countries," he said. Besides, he added, "In Africa we are always happy when our brother is big."


High expectations, considering we know how tough Obama is not on the "bad leaders" around the world.

Just like politicians, churches today see their mission as making it easy for themselves and those who follow. It has nothing to do with being "right" or "moral," but everything to do with power.

This is one of the more disgusting religious news stories I've ever read.
Posted by Maggie Thornton at 7:48 PM