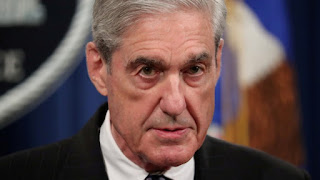 So, let me see if I have this straight in regards to Mueller's press statement.  He said:


The appointment order directed the office to investigate Russian interference in the 2016 presidential election. This included investigating any links or coordination between the Russian government and individuals associated with the Trump campaign.

So, his "job" was to investigate Russian interference and any coordination or "collusion" that Trump or Trump officials participated in.  That's it.  He wasn't tasked with anything else.  His report showed without a doubt that there WAS Russian interference but there was NO collusion or cooperation by the Trump people.  The case should be closed then, right?  Oh wait, he had something else to say in his statement:

The indictments allege and the other activities in our report describe efforts to interfere in our political system. They needed to be investigated and understood. And that is among the reasons why the Department of Justice established our office.
That is also a reason we investigated efforts to obstruct the investigation.

Okay, this is where Mueller goes off the rails. That sentence "That is also a reason we investigated efforts to obstruct the investigation" proves that Mueller went down a path that was NOT tasked him by the Department of Justice.  This is where he went rogue.  We have to understand this completely. Before this investigation began, Mueller and his team knew they would find no collusion - it was a "fairy tale" concocted by Robby Mook and John Podesta.  Mueller's team probably spent 3 months documenting the Russian interference which was known before his team even began and then they spent 19 months on his rogue mission which was to prove obstruction by President Trump.

Now here is where Mueller's statement today goes down the proverbial rabbit hole.  This is where even a meth addict has to scratch his head.  Look at what Mueller had to say:

A special counsel's office is part of the Department of Justice, and by regulation, it was bound by that department policy. Charging the president with a crime was therefore not an option we could consider.

So, what that sounds like is this - they spent 19 months investigating obstruction knowing that they could not charge the President with obstruction.  Think about that.  That would be like a bounty hunter spending 19 months in Canada looking for a wanted man knowing the whole time he cannot bring the target out of the country due to a Canadian extradition law.

Further, Mueller states that CHARGING the president was not an option.  How about identifying the transgression that Trump supposedly engaged in?  Mueller couldn't charge Trump but there's nothing that says he can't ACCUSE him and present the facts.  Hell, even James Comey of the FBI listed all of the transgressions that Hillary Clinton did before he gave her the escape hatch.

Why didn't Robert Mueller step to that microphone today and say "we found proof that President Trump instructed his team of attorneys to lie to our Special Counsel investigators which fulfills the parameters of obstruction but due to DOJ policy, we cannot charge the President with a crime. It is further our conclusion that this evidence meets the requirements for the House of Representatives to embark on impeachment proceedings."?

One final question I have.  If Speaker Pelosi decides to go the route of impeachment, which means she will have to identify the Treason, Bribery or other high Crime and Misdemeanors that President Trump has committed, then will she present the Mueller Report as evidence of that?  Or will she have to engage a NEW Special Counsel to determine the impeachable offense?
Posted by Holger Awakens at 5:00 PM