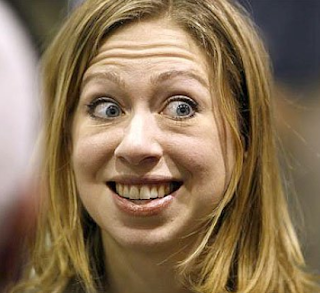 
Chelsea, I have never paid much attention to the "rumor" of your actual father but considering the fact that, while Bill Clinton is a sexual deviant, he is a very intelligent man and your mother has never been accused of being "slow" mentally (corrupt as hell, yes but low intelligence, no) ...when I see tweets like this one I think you seriously need to get together with the people at 23andMe.

Does anyone else think President Trump might benefit from reading Aesop's Fables? The Cat, The Rooster & The Mouse? The Eagle and The Arrow?
— Chelsea Clinton (@ChelseaClinton) July 9, 2017

Posted by Holger Awakens at 2:24 PM