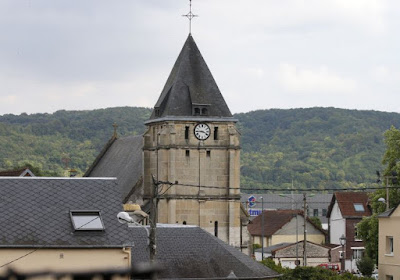 I guess to get any sort of reasoning of Islam's war on Christianity, I have to go to a JEWISH news outlet in ISRAEL.

Regardless of whether Tuesday’s attack was the work of Islamic State or whether it was merely inspired by the jihadi rhetoric emanating from the so-called caliphate, its symbolism is hard to ignore.

Previous attacks in France perpetrated by Islamic State and in its name have been against freedom of speech (Charlie Hebdo), Western liberalism (the Bataclan theater), the ideals of the French Revolution, which stand at the heart of Western thought (the Bastille Day truck attack in Nice) and against Jews (Hyper Cacher).

Now, Islamic State has successfully committed its first act of war on European Christianity itself by taking hostages in a church and slitting the throat of an octogenarian priest as they forced him to kneel and then filmed themselves preaching in Arabic at the altar.

It has been long expected. In April of last year, Sid Ahmed Ghlam, a 24-year-old computer science student of North African extraction, was arrested after shooting himself in the leg. Police suspected him of planning a terrorist attack and a search of his car and apartment found four Kalashnikov rifles, two handguns and a number of bulletproof vests.

Prosecutors said he had been in contact with foreign agents in Syria who had expressly told him to carry out an attack on a church. According to some reports, Ghlam had compiled a list of possible targets, including gunning down parishioners outside a church in the Parisian suburb of Villejuif, and attacks on Paris’s iconic Sacré Coeur Basilica and the Saint-Étienne-du-Rouvray church itself, the target of Tuesday’s attack.

But it didn’t take the fortuitous arrest of Ghlam to realize that Islamic State would step up its campaign to cultivate war between Islam and the West by targeting a Christian symbol.

“We will conquer your Rome, break your crosses and enslave your women, by the permission of Allah,” read a statement from Islamic State spokesman Muhammad al-Adnani in 2014. In May, ahead of Ramadan, Adnani called on the “soldiers of the caliphate” to carry out attacks in Europe and the US and to target the “Crusaders.”

Islamic State has already been waging war on Christians in Iraq and Syria, committing countless atrocities that in March were declared as genocide by the US Congress.

A core part of the terrorist group’s ideology is the belief that an apocalyptic showdown will take place at Dabiq near Aleppo in Syria where the armies of “Rome” – aka Christianity – will be defeated by the armies of Islam. What Islamic State seeks is all-out war to make that apocalyptic vision reality.

After two weeks that have seen five attacks committed either by terrorists in the name of Islamic State or by first- and second-generation Muslim migrants in Germany and France, the nightmare scenario of vigilante revenge attacks by right-wing extremists is looming ever closer.

That is exactly what Islamic State wants.

Posted by Holger Awakens at 2:30 AM