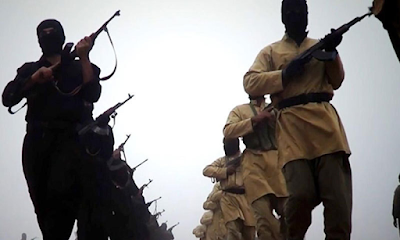 RAMADI UPDATE:  Just an update to confirm for my readers that the Iraqi Shia militias STILL have not gained one inch of Ramadi in Iraq.  That's all for now.

At least 54 dead as IS advances on east Syria airbase: monitor


BEIRUT: Jihadists of Daesh or the self-styled Islamic State group edged closer to a strategic airbase in eastern Syria in heavy fighting that left more than 54 combatants dead, a monitoring group said Thursday.

The extremist group, which has captured territory across Iraq and Syria, seized control late Wednesday of a small base near the regime-held military airport outside Deir Ezzor, the Syrian Observatory for Human Rights (SOHR) said.

"It was one of the IS fiercest attacks on the airport. Eighteen regime soldiers and 23 Daesh fighters were killed," Observatory director Rami Abdel Rahman said, using an Arabic acronym for the jihadist group.

He said 36 IS fighters and 18 regime soldiers were killed.

The seizure of the small base, used by the army's rocket battalion, brings IS within little more than a kilometre of the airport.

Abdel Rahman said the jihadists had used two suicide bombers in the assault, one of them a child, driving cars laden with explosives.

More than 50 jihadists were wounded in the fighting, he added.

IS already controls most of oil-rich Deir Ezzor province including roughly half of its capital, and has attempted to capture the airport and the rest of the city for more than a year.

If IS succeeds, Deir Ezzor would be the second provincial capital to fall to the group after the northern city of Raqa, which it named the capital of its "caliphate."

The assault came as rival jihadists of Al Qaeda's Syrian affiliate and their allies seized the last regime-held military base in Idlib province in the Northwest.

According to the Observatory, the regime is now left with just three airbases in the east and north — Deir Ezzor, and Neirab and Kweyris in Aleppo province.