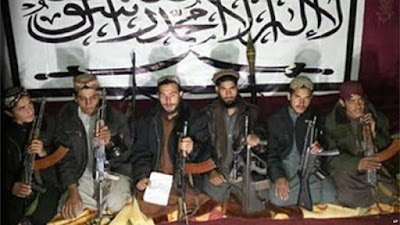 Question. If you assist in a terror attack that kills 141 children, do you still get 72 virgins in paradise?

Well, six of the plotters and abetters in the worst terrorist attack in Pakistan history will get to find out...at the end of a rope.

ISLAMABAD: Six militants who plotted and aided Pakistan's worst ever terrorist attack at a Peshawar school are set to be hanged after Army Chief General Raheel Sharif confirmed their death sentences.

The men, belonging to the Tehrik-e-Taliban Pakistan, were convicted late Thursday for their role in the December 2014 massacre at Peshawar's Army Public School (APS) that claimed the lives of 151 people, including 141 children, The Nation reported.

They harboured and drove the killers who stormed into the school, raked the assembly hall with machinegun fire and stalked the corridors, shooting children and teachers cowering in their classrooms.

The gunmen were killed by the security forces but the attack left Pakistan in deep shock and provoked international outrage.

Those who aided and abetted them were convicted for their role in this and other attacks in special military courts, established in the wake of the massacre to fast-track terrorist cases, earlier this year.

Their death sentences, however, were delayed following a legal challenge to the constitutional amendment under which the military courts were established.

That challenge was rejected last week when the Supreme Court upheld the 21st Amendment and the military courts created under the Pakistan Army (Amendment) Act 2015.

Its ruling cleared the way for trying suspected terrorists in the new courts but said they must be given fair trails and the right to appeal.

Inter Services Public Relations, late Thursday, said the men were given fair trials. All legal formalities, following their convictions, were completed as well and Raheel Sharif confirmed their sentences.

Those facing the gallows include Hazrat Ali, who was found guilty of killing members of the security forces, kidnappings and raising funds for the APS attack; and Mujeebur Rehman, who abetted an attack on the Pakistan Air Force base in Peshawar and helped transport suicide bombers to the APS.

Others include Sabeel, who supported both attacks, and Moulvi Abdus Salam who was convicted of harbouring the suicide bombers prior to the attacks.

Taj Muhammad was convicted of harbouring the APS suicide bombers.

The sixth terrorist to face execution is Ateequr Rehman.

A seventh Taliban terrorist, Kifayat Ullah, who supported the APS massacre and carried out IED attacks, was jailed for life.