Is the al Qaeda vs. ISIS Feud Heating Up? 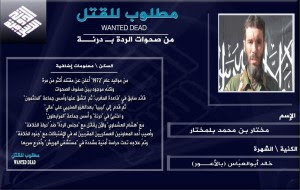 The other day I put up how al Qaeda and the Taliban have formed a new alliance while the forces of ISIS are already butting heads with the Taliban - well, now we see ISIS forces in Libya putting out "Wanted Dead" posters on al Qaeda leadership.

Like I said before, this is gonna be lots and lots of fun to watch.

The Islamic State’s supporters in Libya have continued their “wanted dead” campaign by targeting Mokhtar Belmokhtar, an al Qaeda leader who has long been loyal to Ayman al Zawahiri. The Islamic State’s loyalists have released an online poster for Belmokhtar (seen above), just as they have done for dozens of other pro-al Qaeda jihadists in North Africa. Some senior Islamic State figures on Twitter quickly disavowed the poster, saying it wasn’t an official production.

Not all of the posters are bluster, however. The “caliphate’s” arm in North Africa has specifically targeted some of the individuals identified in previous posters, including leaders of the Mujahideen Shura Council (MSC) in Derna, a jihadist coalition that has been engaged in heavy fighting against Abu Bakr al Baghdadi’s fighters.

Indeed, in June, Baghdadi’s forces killed two veteran jihadists in Derna. The MSC then quickly routed the Islamic State’s branch from its strongholds in the city, pushing most of the fighting to Derna’s suburbs.

The Islamic State is attempting to strike back. The Islamic State says its opponents in Libya and elsewhere are part of the “awakenings.” This term is used to disparage its jihadist rivals, including the MSC, lumping them in with the American-backed tribes and fighters who battled al Qaeda during the height of the Iraq War. In reality, the MSC has nothing in common with America’s allies in western Iraq.

The Islamic State’s supporters say Belmokhtar is part of the “awakenings,” too.

Belmokhtar leads Al Murabitoon, an al Qaeda group that operates in North and West Africa. Al Murabitoon recently released a statement saying that Belmokhtar had been selected to serve as its emir. The statement’s authors added “Al Qaeda in West Africa” to Al Murabitoon’s name. But online operatives quickly clarified that it should have simply read “Al Murabitoon – Al Qaeda,” dropping the “West Africa” part while still emphasizing their connection to Zawahiri’s international insurgency and terrorist organization.

Al Murabitoon’s decision to underscore its connection to al Qaeda was undoubtedly influenced by the uncertainty caused earlier this year when another leader in the group, Adnan Abu Walid al Sahrawi, swore allegiance to Baghdadi. Sahrawi claimed to speak on behalf of the entire Al Murabitoon group, but this was quickly proven false. Belmokhtar and his men remain firmly in al Qaeda’s camp.

The one-eyed Belmokhtar has been reported killed on at least several occasions, only to reemerge. According to Al Murabitoon and other al Qaeda-linked jihadist groups operating in North Africa, including al Qaeda in the Islamic Maghreb (AQIM), Belmokhtar survived a June airstrike by the US in Libya. The US bombed a jihadist meeting hosted by the Ajdabiya Shura Council (ASC), which is led by Ansar al Sharia, yet another al Qaeda-linked group.

Interestingly, local press reports out of North Africa claimed that Belmokhtar was expected to attend the meeting, which was part of his effort to coordinate the opposition to the Islamic State’s presence in Libya. However, this and other details concerning the meeting cannot be easily verified.

Regardless, members of the Islamic State’s Libyan arm clearly see Belmokhtar as a threat.

As The Long War Journal reported earlier this month, one of the “wanted dead” posters (seen on the right) put a former Egyptian special forces officer named Hisham Ali Ashmawi in the Islamic State’s crosshairs. In late July, Ashmawi was featured in a video posted online by “Al Murabitoon,” which is either part of Belmokhtar’s operation or an allied entity in Egypt. The video makes it clear that Ashmawi is loyal to Ayman al Zawahiri.

Egyptian officials allege that Ashmawi has been involved in a string of assassinations, including a car bombing that killed Egypt’s chief prosecutor in June.

According to Baghdadi’s loyalists, Ashmawi “joined the awakenings council” (the MSC) and “participated in the war on the Islamic State in the city of Derna.” The Islamic State has other reasons for its animosity, too. Ashmawi became a member of Ansar Bayt al Maqdis (ABM), a Sinai-based group that pledged allegiance to Baghdadi in November 2014 and was then rebranded as the Islamic State’s “Sinai province.” Ashmwai joined ABM after returning from the jihad in Syria in 2013. But Ashmawi did not join his ABM comrades when they switched allegiance to Baghdadi. Instead, he is part of an ABM cadre that remained in al Qaeda’s network.

The “wanted dead” poster for Ashmawi, which was disseminated by the Islamic State’s supporters, says he has “ties” to Belmokthar. If true, then this is a strong piece of evidence that the two “Al Murabitoon” groups (Belmokhtar’s and Ashmawi’s) are indeed connected.

Another graphic (seen on the right) identifies one of Ashmawi’s alleged colleagues. The jihadist is Imad al Din Ahmad Mahmud Abdul Hamid, a “close friend” of Ashmawi who was also a member of the Egyptian armed forces before joining ABM. Abdul Hamid then broke from ABM and supposedly joined the “Apostate Awakenings Council” (MSC) in Derna.

The poster describes Abdul Hamid as Ashmawi’s “right hand man” and as the “mastermind” of Ashmawi’s plans. He supposedly attempts to hide his identity, which the Islamic State’s supporters have now gladly shared.