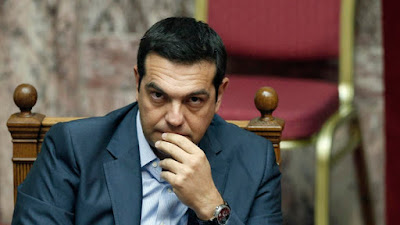 Fuck the Greek Prime Minister, Alexis Tspiras.  This clown, this cowardly Communist played his little game in Greece...got his 15 minutes of fame and hopefully, one day he'll get the rest of his time on earth on a meat hook.

Typical pussy Communist - sweeps into power when the people are desperate and then fucks up things even worse than they ever were before.  Locusts.  Nothing but locusts.

The story comes from Al Arabiya.

Greek Prime Minister Alexis Tsipras has submitted his resignation and that of his cabinet to President Prokopis Pavlopoulos on Thursday, and asked that elections be held on the soonest possible date.

“The present parliament cannot offer a government of majority or a national unity government,” Tsipras told Pavlopoulos during a meeting on Thursday night.

Tsipras effectively lost his majority in the 300-seat Greek parliament after members of his leftist Syriza party broke ranks over a multi-billion euro bailout his government clinched with international lenders this month.

The move came after the leftist leader faced a rebellion in his governing Syriza party over austerity measures demanded in a massive new international bailout worth about 86 billion euros over three years.