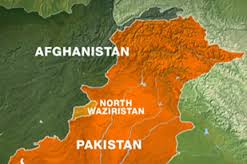 Twelve Taliban are dead in Pakistan's North Waziristan tribal region so the day is starting out well for the whole world.

I gotta give the Pakistanis at least a little credit for continuing the operations in this bee's hive of Taliban jihadis.


DERA KHAN: At least 12 suspected militants and four security personnel were killed in an exchange of fire in Data Khel area of North Waziristan tribal region, according to an Inter-Services Public Relations (ISPR) statement.

The statement added that the militants fled from the scene leaving behind the bodies of three of their colleagues.

The details could not be independently verified.

North Waziristan is one of the seven regions in Pakistan's Federally Administered Tribal Areas (Fata) governed by tribal laws which is situated along the Pak-Afghan border and is rife with Taliban militant activity.

The Pakistan Army launched Zarb-i-Azb, a comprehensive operation in North Waziristan tribal region last summer to drive out Tehreek-i-Taliban Pakistan (TTP) and other extremist militants who launch attacks on government and civilian targets, a week after the brazen insurgent attack on the country's busiest airport in Karachi.

Chief of Army Staff, General Raheel Sharif, visited troops on Friday and said the initial phase around the surrounding peaks of the Shawal Valley was successful and it was now time to begin a final push into the lower areas.

“We will not stop unless we achieve our end objective of a terror-free Pakistan,” he said.

The tribal region, which borders with Afghanistan, has been used as a base by militants over the years. According to the ISPR, troops have been deployed along its border with neighbouring agencies to block any movement of terrorists in and out of the region.

Many militants have fled to other parts of Pakistan, and some into Afghanistan, complicating the US-backed Kabul government's fight against its own Taliban insurgency.

Posted by Holger Awakens at 8:56 AM