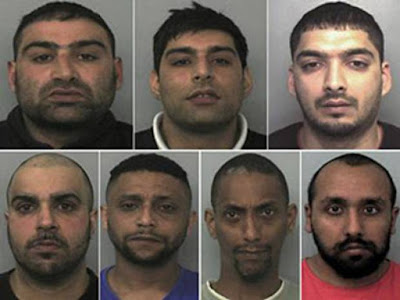 So I read the title of the article below at Times of India and I'm thinking...."this outta be good...the filthy Pakistani Muslim immigrants with their sex grooming and pedophilia are finally getting outted big time"....but then I read the article and I ask you - show me ONE word in that article that says "Muslim" or "Islamic" or even "immigrant."

Muslims raping and pimping English girls is described as a country problem, not a problem of the Islamic minority.

One in 20 children in the UK have fallen victim and these assholes without a spine will NOT even reveal who the criminals are.

How do these people sleep at night?

P.s.  maybe this judge wouldn't be so damned shocked if the media in the country actually reported WHO did these crimes and the police didn't let them get away with it.  By the way, don't blame this horseshit, chickenshit journalism on Times of India - this is an AP article.

LONDON: A judge says Britain has been stunned by revelations about child sexual abuse, warning that the true scale of the crime has been underestimated and one in 20 children may have been a victim.

Justice Lowell Goddard opened a public inquiry into decades of abuse on Thursday, vowing that "no one, no matter how apparently powerful, will be allowed to obstruct our inquiries."

In the past few years, revelations of abuse have implicated taxi drivers, entertainers, clergy, senior politicians and others. There have been claims that police failed to investigate allegations of abuse for decades.

Goddard, a New Zealand judge, was appointed earlier this year to head an inquiry into how public agencies — including government bodies, police, hospitals, churches and the BBC — handled child-abuse allegations.