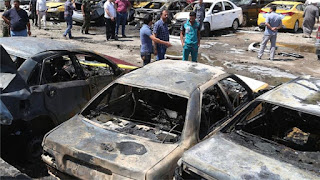 Another bomb blast at an outdoor market killed three shoppers and wounded eight in the city's eastern suburbs.

Also, police said a bomb exploded near a row of shops in the capital's western neighbourhood of Baiyaa, killing two and wounding 10.

Medical officials confirmed the casualty figures. All officials spoke on condition of anonymity because they were not authorised to talk to the media.

No group immediately claimed responsibility for the attacks. Iraq sees near-daily attacks that are claimed by the Islamic State group.

Posted by Holger Awakens at 6:58 AM