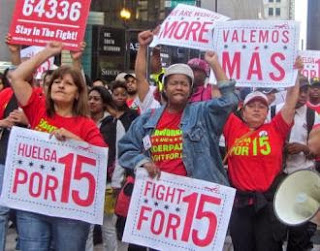 Okay, so over on Twitter there is a hashtag for "FightFor15" - all of the lazy ass fast food workers that want to be paid $15 an hour for flipping burgers or dropping a basket of fries in a fryer are clamoring for the minimum wage to be raised nationwide to $15/hour.

So, if I now have to pay $15 an hour to all of my employees at my McDonald's....why would I continue to pay a snot-nosed whiny 18 year old who is habitually late to work, who refuses to stop texting while they work, who doesn't call when he/she isn't going to make it into work and who habitually gets in arguments with other workers?  I wouldn't.  I'd man my restaurant with those teachers and laborers and IT people - i'd raise the average worker age from 18 years old to 35 years old - I'd have people working at my place who show up on time (or a little early), who put in a full day of work, who operate as a team in the restaurant and who are thankful for their paycheck from me and don't whine.

So for those of you losers who insist on $15/hour...just remember that you aren't all that.  And you WILL be replaced.  Good luck, morons.
Posted by Holger Awakens at 5:30 AM