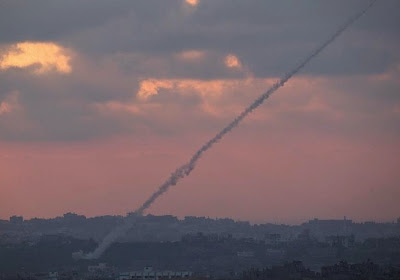 My "Red Alert" Israeli Rocket Attack warning system on my smartphone went off like batshit crazy about an hour ago and yes, it is true - southern Israel is under attack from rockets being fired from Gaza.

There is this report out of Israel National News - it appears that at least one rocket has actually hit Israeli soil.

I guess Hamas wants another war.

There are reports that as many as four rockets were fired from Gaza, and some residents of the south reported seeing Iron Dome missile defense batteries deploying to intercept the incoming rockets.

The IDF has now confirmed that at least one rocket fired from Gaza struck close to the city of Ashdod.

Sirens were heard in Ashdod, as well as numerous towns and villages bordering Gaza.

No injuries have been reported.

The border between Israel and Hamas-held Gaza has remained largely quiet since the end of Operation Protective Edge last summer.

But there have been intermittent attacks by terrorists, including mortar fire last month which hit an open area in the Shaar HaNegev region.

The IDF responded to that incident with tank fire directed towards the source of the rocket fire.