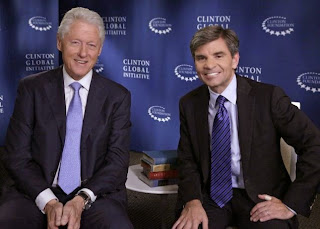 ABC News, hot off their successful implementation of "Get Hillary Out of Another Scandal" via their Sunday morning talk show last week where host George Stephanopoulos, donor to the Clinton Foundation and current political activist in the Hillary 2016 campaign defended the Clintons' money grabbing from foreign governments for political favors and feathering their own nest, has decided on a new lineup for several other shows tomorrow morning.

Here's the new schedule from ABC News for tomorrow with hosts and guests announced:


This Week with George Stephanopoulos:
Host:  George Stephanopoulos (George will be fitted with a hearing piece connected directly to Bill Clinton and James Carville)
Guest:  Hillary Clinton will discuss how the Clinton Foundation saved 2.4 million starving Haitians and she will be joined by 376,489 Haitians that were flown in for the show via flights charged to Stephanopoulos's credit card

Moving Forward With Progressives:
Host: David Axelrod/ABC News
Guest:  Senator Rand Paul will be on to answer Axelrod's questions about why Paul has assaulted Hillary Clinton because she's a woman and Barack Obama because he is black.

Occupy the GOP:
Host:  Sean Penn/ABC News
Guest:  Senator Ted Cruz will be on to answer to a polygraph test conducted by Penn where Cruz will be asked how many of his friends are in the 1% and when the last time was that Cruz actually ate Mexican food.

Posted by Holger Awakens at 9:11 AM