Do You Remember Who Was First To Come To the Rescue of John McCain's Eligibility To Become President? 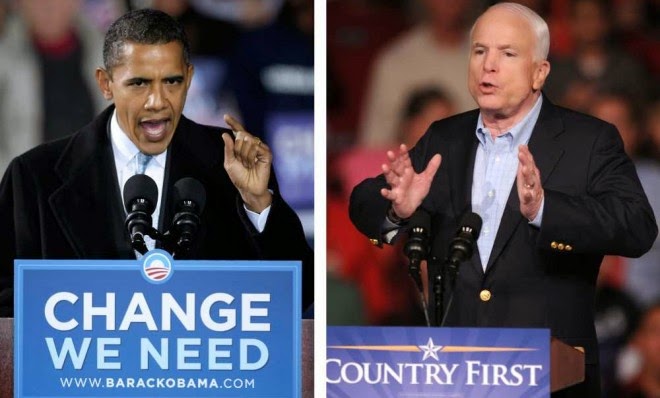 There's a reason for every action in this world.


Despite the misinformation being disseminated by our corrupt political-media culture, there is no ambiguity.

According to Article II, Section I, Clause 5 of the Constitution, the narrative of the 14th Amendment, the Supreme Court case of Minor v. Happersett (1875), other legal opinions, precedence and historical background, Presidential eligibility requires that a candidate be born a US citizen of two US citizen parents at the time of birth.

If you are unwilling to accept the exhaustive legal documentation regarding the true meaning of "natural born" citizenship, you may try the common sense question:

Why has every President since Martin van Buren been a US citizen at birth of two citizen parents except Barack Obama and Chester A. Arthur, who lied about his personal history?

In order to understand the political machinations surrounding the 2008 Presidential eligibility debate, it is important to know that there have been numerous recent attempts by Democrats and Republicans to amend the Article II "natural born citizen" clause, starting in 1975 when New York Democrat House Rep. Jonathon B. Bingham introduced House Joint Resolution 33, which clearly recognized the distinction between "citizen" and "natural born citizen:"

"Provides that a citizen of the United States otherwise eligible to hold the Office of President shall not be ineligible because such citizen is not a natural born citizen."

It may be that our corrupt political-media culture, having failed to change the Constitution by legal amendment, achieved it in 2008 by political fait accompli.

One month after endorsing McCain, on February 28, 2008, about the time Barack Obama began to overtake Hillary Clinton in the Democratic Presidential primary, the New York Times published an article questioning McCain's eligibility to be President according to the natural born citizen clause of the Constitution. According to the Times article, he was born outside the continental United States on a US military installation in the Panama Canal Zone and, therefore, possibly ineligible. The Times story was immediately followed by numerous other news items questioning McCain's candidacy as well as lawsuits in California and New Hampshire challenging his Constitutional eligibility for the Presidency.

Strangely enough, on February 29, 2008, the day after the Times article appeared challenging McCain's eligibility, Senator Barack Obama's campaign announced he would co-sponsor legislation already introduced on February 28, 2008 by his political ally Sen. Claire McCaskill (D-MO) to ensure that John McCain could become president, even though he was born in the Panama Canal Zone.

Obama said: "Senator McCain has earned the right to be his party's nominee, and no loophole should prevent him from competing in this campaign."

The McCaskill Senate bill, "Children of Military Families Natural Born Citizen Act", which she wrote by hand on a notepad after reading the Times article, specified a new part of the definition of "natural born citizen," which, if the bill had passed, would have included "any person born to any citizen of the United States while serving in the active or reserve components of the United States Armed Forces."

The initial McCaskill legislation was eventually superseded by Senate Resolution 511.

SR 511 was introduced April 10, 2008 by McCaskill and co-sponsored by Senators Leahy (D-VT), Obama (D-IL), Coburn (R-OK), Clinton (D-NY) and Webb (D-VA) and referred to the Committee on the Judiciary. It was reported out of committee without amendment by Senator Leahy on April 24, 2008.

"That John Sidney McCain, III, is a ‘‘natural born Citizen'' under Article II, Section 1, of the Constitution of the United States."

Again, strangely enough, the legal basis for SR 511, also contained in the Congressional Record, was provided to the Senate by former Solicitor General Theodore B. Olson, a McCain adviser, and Harvard professor Laurence Tribe, an Obama supporter.

On April 18, 2008, the New York Times concluded that the eligibility issue could only be resolved by a Constitutional amendment, but confirmed the political fait accompli.

"Obviously, we are not going to get the Constitution amended in the next two or three months," said Ms. McCaskill, who was driven to clear up any ambiguity after learning of the potential problem. "We are just trying to send the strongest signal we can as quickly and simply as we can."

So, in April 2008, it appears that McCaskill's "signal" was a political deal struck between the Democrats and Republicans that would provide cover for both McCain and Obama on eligibility and, perhaps, spawned a conspiracy of silence on the issue.

Allegedly Pelosi prepared two different certifications verifying the eligibility of Barack Obama for the Presidency, which were both prepared on the same day, August 28, 2008, and notarized by the same individual.

The Certification of Nomination sent to the state of Hawaii mentioned the Constitutional requirement:

The Certification of Nomination sent to the other 49 states did not mention the Constitutional requirement:

We are asking nicely. Nancy, why the two certifications? We can handle the truth.

The debate over McCain's eligibility continued well into September 2008, when Lawrence B. Solum, the John E. Cribbet Professor of Law at the University of Illinois College of Law, published an article in the Michigan Law Review entitled "Originalism and the Natural Born Citizen Clause" stating:

"What was the original public meaning of the phrase that establishes the eligibility for the office of President of the United States? There is general agreement on the core of its meaning. Anyone born on American soil whose parents are citizens of the United States is a natural born citizen."

Yet again, strangely enough, in April 2010, as the controversy surrounding Obama's eligibility gained momentum, Solum republished his original article, but substituted the word "parent" for "parents", changing the interpretation in a way that could benefit Obama.

Finally, strangely enough, in October 2011, Attorney Leo Donofrio, provided evidence that, during the run-up to the 2008 election, twenty-five U.S. Supreme Court opinions referencing Minor v. Happersett (1875), the case which suggests Obama's ineligibility for the Presidency, were scrubbed then republished at Justia.com, a main internet resource for Supreme Court decisions. According to that report, Justia.com CEO Tim Stanley was associated with Obama For America 2008.

Perhaps all of the above are easily explained coincidences not requiring any investigation. Or maybe, like other cases of willful ignorance, our corrupt political-media culture is just trying to run out the clock on Barack Obama.

Posted by Holger Awakens at 1:57 AM