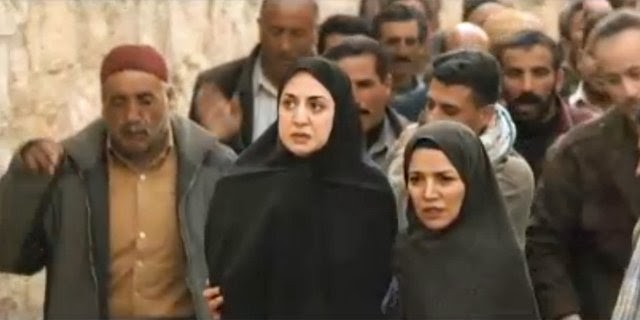 Illustrative photo from the film "The Stoning of Soraya M."

According to Islam, it's aokay for a man in his 30's to marry a 6 year old girl but hey, don't be fooling around with a grown woman or you are going to pay with your life. Please note in the article below that these two from Pakistan were stoned to death based on an ACCUSATION.

The stoning of Daraz Kahn, 24 and Hayat Bibi, 27, is the third case in recent months of a couple being stoned by local mobs in Pakistan.


A couple was stoned to death for the crime of suspected adultery in Pakistan. The young couple, Daraz Kahn, 24 and Hayat Bibi, 27, each of whom were married to other people, were accused by the woman’s husband.

An Islamic cleric issued a fatwa according to sharia (Islamic) law that they should both be stoned to death and a mob, led by Bibi’s husband, carried out the sentence.

Although stoning is legal in Pakistan, it is only legal if ordered by a federal or provincial court. No date, no stonings have taken place legally in Pakistan.

Locals in Loralai, where two other couples were recently stoned to death, report that Bibi went into hiding about a week ago when the charges became known. She reportedly emerged when she heard that the mob had taken Kahn. The mob forced her to watch Kahn being stoned to death, after which – led by her husband and brothers -- they set upon her, hurling bricks and rocks at her until she died.

Six people were arrested in the aftermath for the stoning: Bibi’s husband and the cleric who issued the fatwa, as well as Bibi’s father and brother and Kahn’s father and uncle.

Sarfaraz Bugti, the home minister for the region, ordered the local police chief be dismissed for not taking action at the time of the stoning.

“It is a shameful act and the people involved in stoning the man and the woman will be brought to justice,” said Bugti.

However, it is widely expected that police will take no action against those arrested. Federal courts have little jurisdiction in remote areas of the country and even if charges are brought, conviction rates in honor killings such as these are between 5 and 10 percent. Such cases are typically tied up in the courts for years.

In addition, according to the law, the victim’s family can forgive the killer, exonerating him from all charges. When the victim has been killed by family members, there is simply no case.

Stoning is legal in 15 Muslim countries that base their legal systems on sharia law.

Last year in Punjab, another region of Pakistan, a young mother of two was stoned to death by a mob led her uncle for the offense of carrying a cellular phone.