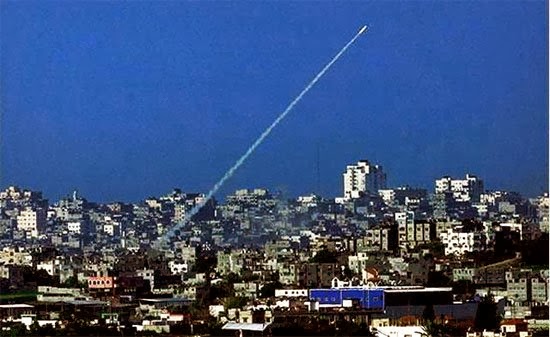 The dumbest people on earth live in Gaza.  They fire homemade rockets into Israel...Israel responds with firepower...repeat....repeat....Israelis have to go into Gaza and "clean up" and then the people of Gaza send videos of how oppressed they are.  People of Gaza - you elected Hamas who fires rockets into Israel and that one action alone helps insure that you will continue as the most backward people on earth...don't you think it's time you had new elections?  Oh wait...when WAS the last time you had elections and actually VOTED to keep Hamas in control?

The attack came a short while after a rocket fired from Gaza hit an open area in southern Israel, causing no damage or injuries.

A statement from the Israeli military said that in response to the rocket, its aircraft targeted "a terror activity site and a weapon manufacturing facility in the northern Gaza strip and a weapon storage facility" in southern Gaza.

Tensions have recently risen in and around Gaza after a year of relative calm, with six Palestinians and an Israeli killed since December 20 and militant rocket fire sparking retaliatory air strikes.

On January 22, the army killed two Palestinians, one of them identified by Israel as a militant from the Popular Front for the Liberation of Palestine who the army said was behind recent rocket attacks.

Hamas recently confirmed it had deployed forces in Gaza to "preserve the truce" with Israel, brokered by Egypt, which ended the last major confrontation in November 2012.

While Hamas does not routinely launch projectiles at the Jewish state, Israel says it holds the Islamist group that seized power in Gaza in 2007 responsible for any such attacks.

Posted by Holger Awakens at 5:05 AM

Allow me to pose a question.

What is your opinion on Mr. Edward Snowden?

Surely this is a fair question, no? Nothing anti-Semitic about it.

Snowden...some say her some say traitor. Personally I prefer hero. Finally someone exposed this government for what it is. A police state type organization. Obama has embarrassed teh USA far too much . Spying on leaders whose next. No apologies. Snowden is not a criminal . He stole ye, but for a greeter good. Of course there are those who disagree but in teh end "what does it really matter now"

That can't possibly be Obama's fault too. He's a continuation of his predecessor.

Would you still call Snowden a hero if Bush or someone else was President? Are you sure you're not rooting for Snowden just for the sake that the Obama administration suffers? At the expense of national security?

Well if you're willing to let your personal distaste for the Obama administration get in the way of protecting assets in the field.

What else are you willing to do?
Campaign for President Rouhani's re-election campaign?

You get me wrong my dear Col. I detest liars BHush may have lied, but if he did i did not pick up on it. Obama on teh other hand lies regularly and often Thats why i dont like the Liar in Chief. As for Snowden, I am for him because in my view only... he did the right thing. How much more are we having our rights trampled for reason of security that we dont know. Current government is way too large, has insinuated itself into every aspect of our lives. Time tog et government out of our lives and let us live our own lives free from Surveillance because they can.

A fair question. Edward Snowden violated the trust and terms of contract of his employer and thus should have been terminated and faced criminal charges.

This is an interesting cultural exchange.

Permit me a different question.

What is your opinion of Operation Ajax?

This question goes to all who frequent this establishment. As well as you Mr. Holger