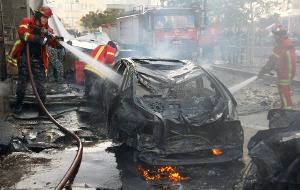 It appears that Hezbollah has retaliated against some of Lebanon's anti-Syria leadership members as a massive car bomb killed five people today including one of the leaders of a coalition back the anti-Assad groups in Lebanon.  This fallen leader's last action before being blown up was to send a tweet that degraded Hezbollah.

If there is a silver lining in all of this, it's the fact that Hezbollah is now forced to carry out bombings in Beirut and not in Israel.


BEIRUT: A huge car bomb rocked central Beirut on Friday, killing five people including an influential member of a coalition opposed to the Syrian regime, and leaving cars ablaze and buildings wrecked.

State news agency NNA said that Mohammad Chatah, 62, died as he headed to a meeting of the March 14 coalition at the mansion of ex-prime minister Saad Hariri, in the city centre. Dozens were injured.

Footage broadcast by Future TV showed people on fire, others lying on the ground, some bloodied, as well as the mangled remains of a burning car. Some people were seen walking around dazed and shocked. Ambulances as well as security reinforcements rushed to the stricken area, where large crowds had gathered.

The blast sent thick black smoke scudding across the capital's skyline and over the Serail, a massive complex that houses the offices of the Lebanese prime minister.

NNA news agency gave an initial toll of five people killed and more than 50 wounded in the blast, and said that more than 10 buildings in the area were badly damaged.

The Serail, which sits atop a man-built hill and towers over a vibrant city centre, was destroyed in the 1975-1990 civil war.

"We were opening our store when we heard the blast. It was really loud. We are used to blasts in Lebanon but not in this area. Now we are not safe anywhere," said Mohammad, 23, a shop attendant in the stricken area.

Ziad, a 37-year-old businessman whose office is located near the scene of the attack, told AFP: "Chatah was a really respectful person. He was very nice. I was so shocked he has been killed."

Asked whether he felt safe in the country, which has suffered a string of explosions in recent months, Ziad said: "If I had the chance to take my wife and children somewhere else, I would."

The attack was a grim reminder that the violence that tore Lebanon apart during the civil war is never far away, and comes as a war is raging across the border in Syria.

The 33-month conflict, which has reportedly killed more than 126,000 people, has deepened political and sectarian divisions in Lebanon, and sparked often deadly fighting between opponents and supporters of the Syrian regime.

Chatah, an influential economist and former minister of finance and Lebanon's envoy to Washington, had served as adviser to ex-premiers Fuad Siniora and his successor Saad Hariri.

Hariri heads the anti-Syria March 14 coalition, a group which emerged after his billionaire father and ex-premier Rafiq Hariri was killed in a massive Beirut seafront car bombing in February 2005 that was blamed on Syria.

The coalition backs Syrian rebels who have been battling President Bashar al-Assad's forces since mid-March 2011 in a bid to topple his regime.

The powerful Shiite movement Hezbollah, a nemesis of the March 14 coalition, has sent militants to fight alongside Syrian regime troops against the rebels, triggering the wrath of many at home.

An hour before he was killed Chatah, a Sunni figure, tweeted a message slamming Hezbollah.

"Hezbollah is pressing hard to be granted similar powers in security & foreign policy matters that Syria exercised in Lebanon for 15 years," he said, in reference to Syria's nearly 30-year military and political hegemony in Lebanon that ended after Rafiq Hariri's murder in 2005.

President Michel Sleiman warned in November that Hezbollah's involvement in Syria was a threat to Lebanon's "national unity and civil peace".

His comments to mark the 70th anniversary of Lebanon's independence came just two days after a double suicide bombing struck the embassy of Iran, an ally of both Hezbollah and the Syrian regime, killing 25 people, and weeks after bombings struck Hezbollah's southern Beirut bastion.

Lebanon has been without a government for months over deep divisions between Hezbollah and the parties opposed to its involvement in Syria. Friday's bombing came as Lebanese celebrated the Christmas festivities.

Posted by Holger Awakens at 4:45 AM