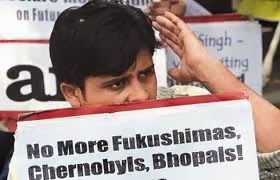 Apparently, anti-nuclear activists in India are just as much a bunch of dumbshits as the ones here in America.

NEW DELHI: A crude bomb has exploded near a nuclear plant in southern India, killing six people and seriously injuring three others, including an anti-nuclear activist whom police say is a suspect.

Local residents have protested for years against the plant over fears an accident could create a health hazard.

Police say the bomb that exploded Tuesday night likely went off accidentally as suspected activists were making several crude explosive devices in a house about 15 kilometers from the plant.

Superintendent Vijayendra Bidari says police recovered two unexploded bombs, but have yet to question the injured suspect who is receiving treatment for serious injuries.

Posted by Holger Awakens at 4:52 AM