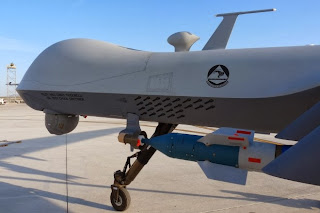 On Monday, two al-Shabaab jihadis saw their last glimpse of life as American hellfires descended upon them...fired from a drone high above.  I'd say "rest in peace" but it wouldn't be sincere and it certainly wouldn't be accurate.  Welcome to the Gates of Hell would be both more appropriate and more accurate.


The US killed two Shabaab operatives, including a senior explosives expert, in a drone strike that targeted a vehicle in southern Somalia today.

The remotely piloted Predators or the more deadly Reapers fired three missiles at a car as it traveled in the town of Jilib, about 50 miles north of Kismayo, Voice of America reported.

One of the two Shabaab operatives killed was Anta Anta. He was described as "the mastermind of al Shabab's suicide missions," according to VOA. He was involved in a series of five coordinated suicide attacks in 2008 that targeted the presidential palace, a UN compound, the Ethiopian Consulate in Somaliland, and an intelligence headquarters in Puntland. The identity of the other slain Shabaab operative was not disclosed.

The drone strike in Jilib was likely launched from a US base in Arba Minch in Ethiopia. The existence of the base was revealed in 2011.

Although it formally joined al Qaeda in early 2012, Shabaab has been closely tied to the global jihadist group for many years. Top al Qaeda operatives, including several who were indicted for their roles in the 1998 bombings at the US embassies in Kenya and Tanzania, have served in senior leadership positions in Shabaab.

Second raid by US in Somalia this month

Today's drone strike is the second reported raid targeting a top Shabaab leader in the past month. On Oct. 5, US Navy SEALs attempted to capture Abdulkadir Mohamed Abdulkadir, Shabaab's external operations chief, who is also known as Ikrima. Shabaab forces repelled the raid; the US Department of Defense said that US forces withdrew after concerns over the likelihood of civilian casualties.

Today's drone strike took place just one month after Shabaab forces launched a deadly, Mumbai-like raid on an upscale mall in Nairobi, Kenya, that resulted in the deaths of more than 65 civilians, including Europeans and Americans. Shabaab assault teams executed civilians and controlled the mall for 80 hours before explosions led to the collapse of a section of the four-story mall, which ended the siege.

Shabaab also repelled another raid by foreign special operations forces earlier this year. In January 2013, French commandos launched a failed raid in the town of Bula Marer to free a French intelligence official who had been captured by Shabaab in 2009. Shabaab fighters halted the attack and captured a French commando, who later died in custody. Shabaab released photographs of the captured soldier and weapons and gear seized during the raid, and then executed the French intelligence official.

The US has targeted top Shabaab leaders in drone and conventional airstrikes in the past. Bilal al Berjawi, a British national of Lebanese descent, was killed in an airstrike in January 2012. Al Berjawi was the senior deputy of Fazul Abdullah Mohammed, the leader of al Qaeda East Africa who also served as a top commander in Shabaab. Fazul was killed by Somali troops at a checkpoint outside Mogadishu in June 2011.

The US also killed Aden Hashi Ayro and Sheikh Muhyadin Omar in an airstrike in the spring of 2008. Before his death, Ayro was the leader of Shabaab.

Fazul and Saleh Ali Saleh Nabhan, who also commanded al Qaeda East Africa, were also targeted, along with Abu Tala al Sudani, in US airstrikes in 2007 and 2008 during the Ethiopian invasion and occupation of southern Somalia. And Hassan Turki, another senior Shabaab leader who is closely tied to al Qaeda, was targeted in a US strike in 2008.

Nabhan was also the target of a US special forces raid in the Somali town of Barawe in 2009. US commandos killed Nabhan and another terrorist during the raid.

Posted by Holger Awakens at 1:07 AM