Pakistani Christians Pistol-whipped For Not Converting To Islam 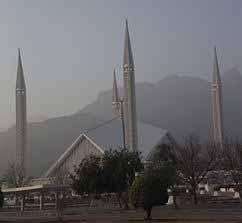 A Christian in Pakistan - can you imagine?  Even for a minute?

The story comes from Morning Star News via The Religion of Peace.


LAHORE, Pakistan (Morning Star News ) – Police in Islamabad have arrested three Muslims for pistol-whipping a Christian and his teenage nephews after they refused to convert to Islam, sources said.

The assailants in an Islamabad suburb allegedly have links to a banned Islamic extremist group. The primary suspect, Muhammad Nadeem, and others approached a 43-year-old Christian, low-level government worker Boota Masih, the night of Oct. 4 in the Khokhar Town area of suburban Islamabad, Masih said.

“At around 9 p.m. my teenage nephews and I were standing in the street along with some Muslim neighbors when Nadeem and three of his accomplices approached us on two motorcycles,” Masih said. “At that time we were discussing the recent terrorist attacks in Peshawar, including the one on a church [in which more than 80 Christians were killed and several dozen injured when two Uzbek suicide bombers targeted the Sunday service].”

The visitors joined the conversation, which turned tense when Nadeem said Christians had altered the Bible over the years and that Christianity was “a distortion of facts.”

“He then bluntly asked me to convert to Islam,” Masih said, adding that Nadeem told him, “Islam is the only true faith, and you must join us to fulfill Allah’s will. The West and Zionists are hatching conspiracies against Islam because they are scared of its rise and popularity in their countries … They know one day Allah will give the whole world in our control and every person will become a Muslim.”

Masih told Nadeem that he wasn’t interested in discussing religion with him, and that he should stop unnecessarily criticizing Christianity, he said.

“The other Muslims present there also objected to Nadeem’s provocative remarks and told him to leave us alone, but he refused to leave, threatening instead that they would make sure that all Christians ‘seek forgiveness’ and ‘embrace Islam,’ or else they would have to face the ‘consequences,’” he said.

Masih said that when Nadeem refused to back down in spite of several warnings, a scuffle broke out between them.

“Nadeem and two of his accomplices hit us with the butts of their handguns, besides punches and kicks, and waved their weapons in the air to prevent others from intervening,” he said.

The assailants left him and his two young nephews lying on the road, bleeding profusely, he said.

Masih said that Nadeem was said to be a local ruffian who has been named in several criminal cases, but that this was the first time he had been involved in a religiously motivated incident.

“If a local maulvi [Islamist cleric] pressured us to change our faith, I would not have been surprised, but being forced by a local criminal to convert to Islam was shocking for me,” he said.

The next afternoon, Masih said that he and his family were out shopping when a neighbor called him by cell phone and told him that Nadeem and two others had attacked his home.

“We rushed back to our house and saw that the door of the house was damaged,” he said. “Nadeem and his accomplices had fired at the door, and bullet holes were also visible on the wall and façade of the house. I thanked God that none of us were present in the house when all of this happened, or else the loss would have been irreplaceable.”

Masih said that he decided to register a complaint with the Shahzad Town Police Station against Nadeem and two of his unidentified friends. Shahzad Town Inspector Asjad Mahmood told Morning Star News that police investigated and registered a case against the assailants for forcible conversion under penal code sections 506, pertaining to criminal intimidation, and 298, “deliberate intention of wounding the religious feelings of any person.”

The three Muslims who tried to force Boota Masih and his nephews to convert to Islam have been jailed, and police have prepared charges against them, Mahmood said.

“The accused admitted that they had forced Masih and his nephews to change their faith and also confessed to have attacked his house when they refused,” Mahmood said. “Such incidents cannot be condoned, as no one can impose their belief on others.”

Sub-Inspector Azhar Mahmood, the investigating officer in the case, also told Morning Star News that he had found that Nadeem and his accomplices had tried to force Masih and his nephews to renounce Christianity.

“Nadeem is a local criminal, and several cases are already registered against him,” Azhar Mahmood said. “We are still investigating his links with banned outfits, but during interrogation it was revealed that he’s also hooked on drugs, which might have played a role in his errant behavior.”

He said that on Oct. 11, when he escorted Nadeem and the others to court for their hearing, the primary suspect’s parents were also there. He said that Nadeem started verbally abusing his parents, telling them that they should stop worrying about him as he had “devoted himself to serving Islam.”

The police official said that area residents had told officers that Nadeem and his accomplices had recently started picking quarrels with Christian residents. He added that there were about 200 to 300 Christian families in Khokhar Town, but that this was the first time a Christian had registered a formal complaint against Nadeem and his friends.

“We have assured the Christians that we will protect their lives and property from such anti-social elements, but they should also trust us and inform whenever they face such a situation,” he said. “Islam preaches peace and tolerance, but such elements are maligning its image by imposing their own brand of religion.”

When you deal from strength your enemies are at bay when you deal from weakness your enemies are emboldened one need only look to the current administration to see teh weakness systemic in Obamas group and how are allies and enemies are treating us. A mook pulls a gun and pistol whips you, you take it aweay and shoot him in teh knee caps (both) so he understands teh price to pay. Strength not weakness. Too Bad Obama has not learned this lesson. All those who respect Obama say Aye!!!.... Silence is deafening folks