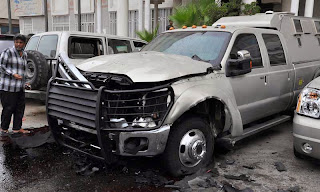 Al Qaeda in the Arabian Peninsula is off to a bang up start for the weekend as one of their suicide bombers took out 12 Yemeni soldiers earlier today.


ADEN: A suicide car bomber killed 12 soldiers and wounded six others Friday in an attack on a military command centre in southern Yemen's Abyan province, security and military sources said.

The attack in the district of Ahwar targeted the command centre of the 111th Brigade, the security source said, adding that the commander of the brigade was “seriously” wounded in the blast.

The sources gave an initial toll of six dead, but said later that it had doubled to 12 dead. The commander was among the six wounded.

There was no immediate claim of responsibility for the attack.

Last month a gun battle in Abyan province left two suspected Al Qaeda militants and a pro-government militiaman dead, after a failed attack on the head of a militia that backs the government.

The militias, who recruit from the area's heavily armed tribes, fought a fierce war alongside the army in mid-2012. They helped to drive Al Qaeda militants out of the main cities of Abyan, after the extremist network had held them for a year.

Prayes for teh 111th I hope teh new commander does not rest on his laurels but immediately orders reprisal raids with no quarter asked or given. Hit them back ten times harder, make Al queada bleed