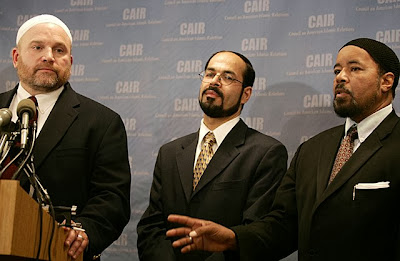 Isn't it just about time that CAIR's leadership is put behind bars in this country or deported and this terrorist organization shut down?

The Council on American-Islamic Relations (CAIR), a U.S. Muslim Brotherhood entity that portrays itself as a “moderate” representative of the Muslim-American community, has a complex and probably illegal scheme to hide its foreign financing, according to a blockbuster expose in the Daily Caller.

The revealing of the previously unknown system shows “that CAIR is engaged in a thinly-disguised money laundering operation,” said David Reaboi of the Center for Security Policy. He says that CAIR is violating Internal Revenue Service laws and the Foreign Agent Registration Act.

Ironically, it was CAIR’s own attempts to silence its critics that exposed its shadowy activity. The documents were obtained as a result of CAIR’s lawsuit against the Center for Security Policy and Dave and Chris Gaubatz following the publication of Muslim Mafia. The book is based on data obtained by Chris Gaubatz when he infiltrated CAIR by becoming an intern. He recently talked with the Clarion Project about his experience.

CAIR is registered as a 501(c)(4) non-profit organization. The IRS says this is for social welfare organizations and that can include “organizations that engage in substantial lobbying activities.” Donors to this type of non-profit do not have to be disclosed.

In June 2013, CAIR changed its name to Washington Trust Foundation, Inc. Another previous name it used was CAIR-Action Network.

In 2005, CAIR sets up CAIR Foundation, Inc. and it receives its 501(c)(3) non-profit two years later. The IRS says these are charitable organizations that are prohibited from campaign activity. Its donors are disclosed and receive tax deductions.

This second organization did not file the required IRS forms from 2008-2010 and lost its non-profit status in 2011. In 2013, its status was revised and it changed its name to CAIR-Action Network, Inc.

The Daily Caller explains that it is legal for an organization to have two different types of non-profit entities, but they must be strictly separated. In CAIR’s case, they function as one.

To disguise its foreign donors, the financier writes a check to “CAIR” without specifying which entity. The funds are placed in the CAIR/Washington Trust Foundation account so the original source can be hidden.

To give you an idea of how important foreign financing is to CAIR, consider what the Washington Times discovered in 2007. Its official membership had fallen over 90% since 9/11 and only one percent of its budget came from its less than 1,700 members. Remember that next time that CAIR portrays itself as the legitimate voice of the Muslim-American community.

That means that literally 99% of CAIR’s funding came from only about two dozen donors. CAIR’s local chapters file independently and raise their own funds, but this shows how good CAIR is at using the media to portray itself as a mainstream organization.

CAIR’s hiding of its foreign sponsors also may violate the Foreign Agents Registration Act. The government summarizes it as:

CAIR is not registered as a foreign agent, but the Daily Caller reports “CAIR has met and coordinated with foreign principals on at least 35 occasions and engaged in more than 100 political influence operations on behalf of foreign principals in the United States.”

It’s easy to understand why CAIR would hide the identities of some of these foreign principals once you learn who they are.

The government of Qatar, the main state sponsor of the Islamist Muslim Brotherhood, has given a minimum of $405,000 over five years.

The “Interests Section of Iran” donated an unknown amount in 2008, as mentioned during CAIR’s 14th annual fundraiser.

The now-deceased President of Libya, Muammar Qaddafi, was asked by top CAIR officials to help pay for the distribution of 1 million Qurans in September 2009. CAIR Executive Director Nihad Awad even asked him to fund the creation of yet another non-profit to be called the Muslim Peace Foundation.

Qaddafi’s regime was long labeled by the U.S. as a State Sponsor of Terrorism, but was no longer at the time of the meetings.

The Sudanese government, listed as a State Sponsor of Terrorism by the U.S. government, has been approached by top CAIR officials since at least November 2009.

Declassified documents show that on a single trip to Saudi Arabia, the CAIR leadership planned “to solicit $50 million in governmental and non-governmental contributions.”

Various sources in the United Arab Emirates, including its embassy in the U.S., have given over $450,000.

Think about CAIR’s record and where it stands today.

The U.S. government labeled CAIR an unindicted co-conspirator and a U.S. Muslim Brotherhood entity in the trial of the Holy Land Foundation for financing the Hamas terror organization. Specifically, CAIR was labeled an entity of the Brotherhood’s Palestine Committee, a secret body established to support Hamas.

In 2009, this incriminating label was upheld by a federal judge because of “ample” evidence linking CAIR to Hamas. The FBI has officially severed non-investigative contacts with CAIR because of its links to Hamas.

The planned prosecution of CAIR founder Omar Ahmad was stopped by the Justice Department in 2010. According to Muslim Mafia, at least 15 CAIR officials have been convicted or investigated in terrorism probes.

And now, there is solid evidence that CAIR is involved in money-laundering to disguise its foreign financiers.

When will CAIR finally get shut down?

Posted by Holger Awakens at 4:41 AM

When will CAIR finally get shut down.

The final answer on this is as follows.

That is when they will finally get shut down