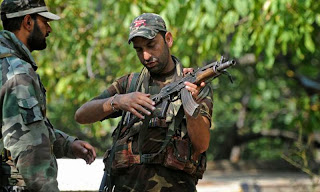 The attackers escaped after hijacking a truck and were now engaged in a fierce gunbattle with Indian troops in the Samba district of Indian administered Kashmir, the NDTV news network and other local media reported. — File Photo by AFP


In just days after the widely publicized Islamic terror attack on the shopping mall in Kenya, Islam continues to cull the human population of the Earth as Islamic terrorists from Pakistan stole into Indian-controlled Kashmir attacking a police station as well as an Indian army installation - between dead police, civilians and Indian troops, the death toll stands at nine.


The story comes from DAWN.


SRINAGAR: Militants stormed a police station and an Indian army base in Kashmir on Thursday, killing at least nine in an attack the state's chief minister said was aimed at derailing peace talks between India and Pakistan.

“This attack in Jammu is aimed at derailing the dialogue process,” said Omar Abdullah, chief minister of the Indian administered Kashmir.

The group of militants who attacked a police station and army camp in India administered Kashmir on Thursday had crossed the border from Pakistan the previous day, the state's chief minister said.

“Given the history, timing and location, the aim is to derail the proposed meeting between Prime Minister Manmohan Singh and his Pakistani counterpart,” Abdullah said. “There are forces that are inimical to peace and want to derail any peace process.”

The militants, all wearing army fatigues, lobbed grenades and opened fire at the Hiranagar police station near the border with Pakistan, police said.

Around the same time attackers struck at an army base in the nearby Samba district in the southern-most part of the the Indian-administered state where a fierce gunbattle with soldiers took place and Indian tanks were deployed.

The attacks are set to overshadow a meeting by Indian Prime Minister Manmohan Singh and his Pakistani counterpart Nawaz Sharif on the sidelines of the UN General Assembly this weekend, the first top-level dialogue in three years.

Manmohan Singh condemned “the heinous terrorist attack” in a statement but said that that it “will not deter us and will not succeed in derailing our efforts to find a resolution to all problems through a process of dialogue”.

Militant attacks have a history of stalling stop-start peace efforts between the two neighbours, who have fought three wars since independence, because New Delhi accuses Pakistan of abetting the groups which strike Indian targets.

The NDTV channel reported that Thursday's attackers may have driven from the police station to the army camp in a hijacked truck, but other security sources cautioned that there might have been separate groups.

“I was inside the dhaba (a roadside eatery) when I saw three men entering the camp firing a barrage of bullets. They opened the gates and entered,” one eyewitness told reporters outside the army camp in Samba.

Gunshots could be heard ringing out from inside the walled compound, while two officers could be seen running out carrying an injured man over their shoulder.

At least five policemen and two civilians were killed in the first attack on the police station in Kathua district, a police officer told AFP, and at least two soldiers including an officer died in the second assault, a separate army source who asked not to be named confirmed.

Indian premier Singh confirmed on Wednesday that he would meet his Pakistani counterpart Nawaz Sharif despite calls from the opposition to take a hardline with Islamabad.

Formal peace talks known as the Composite Dialogue are currently off and India has been keen to downplay any expectation they might restart as a result of Sunday's talks.

“Primarily we will see whether the dialogue process that started between the two countries, that stopped and got derailed, can that be brought back on track,” Foreign Minister Salman Khurshid told reporters at the UN on Wednesday.

Kashmir, a picturesque Himalayan territory, is divided between India and Pakistan by a de facto border known as the Line of Control (LoC) but it is claimed in full by both countries.

Posted by Holger Awakens at 2:50 AM