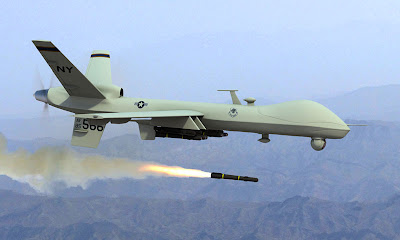 So, Turkmenistan is missing four of its favorite jihadis today as a U.S. drone turned their vehicle into a fireball as they drove through their second home in North Waziristan, Pakistan.  No more planting IEDs to kill American troops, no more raping 10 year old girls, no more shooting polio vaccine workers in the head.

Have a blast in Hell, boys.


PESHAWAR/MIRANSHAH: A US drone targeted a vehicle in North Waziristan tribal agency on Saturday, killing four suspected militants said to be of Turkmen origin.

According to local security officials and intelligence sources, the drone fired two missiles around 12:30 pm at a vehicle near a seminary in Hesokhel Musaki village in Mirali, around 40 kilometres east of Miranshah, the main town in North Waziristan which is said to be a stronghold of Taliban and al Qaeda-linked militants.

Multiple sources said four suspected were killed in the missile strike which destroyed the vehicle and severely damaged the walls of the seminary.

Intelligence officials said the four men were identified to be militants from Turkmenistan.

They said the funerals of the four were later offered in Mir Ali Tehsil and their bodies buried at the local graveyard.

Local militant sources said the four foreigners, said to be members of the Islamic Movement Turkmenistan (IMT), were affiliated to the Hafiz Gul Bahadur faction of Taliban militants.

Bahadur is one of the most powerful militant leaders in the North Waziristan border region, and is known to have links with foreign militant groups.

He runs a coalition of various outfits in the tribal agency and is has close relations with the Haqqani group since the Soviet invasion. Reports suggest he is presently responsible for providing logistic support and other facilities to the Haqqani group.

US drone attacks are deeply unpopular in Pakistan, but Washington views them as a vital tool in their fight against Taliban and al Qaeda militants in Pakistan’s semiautonomous tribal areas along the border with Afghanistan.

The Pakistani government has repeatedly protested against drone strikes as a violation of its sovereignty.

Posted by Holger Awakens at 6:34 AM