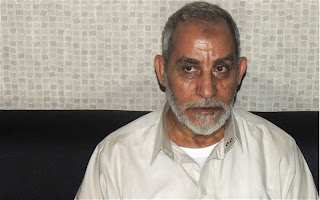 
Muslim Brotherhood leader Gomaa Amin is in hiding in London

The new spiritual leader of Egypt’s Muslim Brotherhood is living in hiding in London in fear of state-sponsored assassination, it can be disclosed.

Gomaa Amin is understood to have been made head of the Islamist organisation last week following the arrest of his predecessor in Cairo by Egypt’s military rulers.

Mr Amin, 79, had flown to London about two months ago for medical treatment and as a result escaped detention when the army seized power in a bloody coup.

He is now residing at an undisclosed address from which he is trying to orchestrate the Muslim Brotherhood’s response to the coup.

The presence of Mr Amin in London is a potential headache for British authorities who may be obliged to provide protection for such a senior and controversial figure.

The Muslim Brotherhood supports a caliphate, a unified Islamic state under Sharia law, and has been accused of fuelling religious tensions in the Middle East, particularly with the Christian minority.

Attacks on Christians in Syria and Egypt are highlighted in a new interview with Lord Sacks, the outgoing Chief Rabbi, who spoke of his grave concern for the religious minority.

“I think this is a human tragedy that is going almost unremarked,” Lord Sacks says in an interview with the Telegraph.

“I don’t know what the name for this is, it is the religious equivalent of ethnic cleansing. We are seeing Christians in Syria in great danger, we are seeing the burning of Coptic churches in Egypt.

“There is a large Coptic population in Egypt and for some years now it has been living in fear. I think sometimes Jews feel very puzzled that Christians do not protest this more vociferously.”

Lord Sacks’s comments - while not directly aimed at the Muslim Brotherhood which describes itself as a non-violent organisation - will turn the spotlight on the Brotherhood’s Egyptian leaders, who appear to be making the UK their base in exile.

There will may be concern that Mr Amin’s residency in London will attract militant Islamists. In the 1980s and 1990s, Britain largely operated an 'open-door’ policy allowing extremists to live in exile in London to escape persecution from authoritarian regimes in the Arab world.

So-called 'preachers of hate’ including Abu Qatada, Abu Hamza and Omar Bakri Mohammed used London as a base to radicalise young Muslims, who went on to commit or attempt terrorist atrocities both here and abroad.

Supporters of the Muslim Brotherhood say it is wrong to liken the group to other Islamists which support al-Qaeda and other terrorist organisations.

The Muslim Brotherhood, through its political wing the Freedom and Justice Party, has instructed lawyers in London to investigate whether Abdulfattah al-Sisi, the Egyptian general at the head of the army, who deposed Mohammed Morsi, the country’s democratically-elected president, has committed crimes against humanity.

The team of lawyers includes Lord Macdonald of River Glaven, the former director of public prosecutions, and Michael Mansfield QC, who brought the private prosecution against the killers of Stephen Lawrence.

Legal actions may be brought at the International Criminal Court (ICC) in the Hague or else through a private prosecution in London.

If successful, Egypt’s new military rulers may face having their assets frozen in the West and even possibly arrest should they try to visit the European Union or other countries signed up to the ICC.

Mr Amin is understood to be heavily involved in bringing the case although lawyers refuse to identify individuals over fears for their safety.

Tayab Ali, a partner at human rights law firm ITN Solicitors who is head of the legal team, said: “It is really dangerous for Muslim Brotherhood members in exile in London.

"Nobody anticipated how extreme General Sisi’s interim government has been. It appears to be trying to exterminate the Muslim Brotherhood and wipe it out. Nobody will argue that the lives of the senior leadership are in danger and that includes those in London.”

There has been confusion over who is running the Muslim Brotherhood since the security crackdown. Mohammed Badie, 70, its previous spiritual leader, was arrested last Tuesday morning in Cairo.

His position appears to have been taken by Mr Amin, a deputy leader almost a decade older. Mr Badie defeated him in elections to the senior position in 2010.

The Muslim Brotherhood has refused to confirm the identity of its new spiritual leader but Mshariq.com, an Arabic news website, reported that an emergency meeting had taken place following Mr Badie’s arrest and Mr Amin given the role. It is not clear if he is an interim leader.

Mona al-Qazzaz, the Muslim Brotherhood’s spokeswoman in the UK, described Mr Amin as a senior leader who had arrived in London earlier in the summer.

She said: “He is one of the senior leaders of the Muslim Brotherhood and he is here in London. He was here for medical checks two months ago.”

Mr Amin, a father of three, has been an official member of the Muslim Brotherhood since 1951 and for many years has been pursued by the Egyptian authorities.

He was a vocal supporter of the Arab Spring and actively voiced calls for Sunni Muslims, who predominantly support the Muslim Brotherhood, and Shiites to unite against “a single enemy who [is] American Zionist”.

Posted by Holger Awakens at 2:30 PM