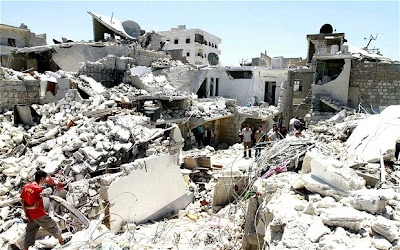 So a missile barrage from the military of Bashir Assad hit the city of Aleppo full force killing 29 people but a watchdog group claims that of the 29 civilians killed, 19 of them are children.

Oh well, children really don't count in the wars of Islam...well, at least as long as you aren't an infidel fighting in Afghanistan then you better not touch the hair of one boy or girl.


At least 29 people, mostly children, died in a regime missile strike on the Syrian city of Aleppo, a watchdog said, as Hizbollah-backed regime forces advanced in flashpoint Homs.

Nineteen children were among the 29 killed in the northern city’s Bab Nairab neighbourhood “in a surface-to-surface missile strike by regime forces” on Friday, the Syrian Observatory for Human Rights said.

The Britain-based monitoring group relies on a wide network of medics and activists on the ground.

A militant group said the toll could rise as rescue operations were still under way on Saturday.

The Observatory said the army was targeting rebel headquarters, including a base of the jihadist Islamic State of Iraq and the Levant (ISIS), in Bab Nairab. “But the missile fell dozens of metres (yards) away,” it said.

“My whole family was wiped out, my whole family,” a boy in tears said near the rubble of his home, in a video posted by the Observatory.

On the battlefield in central Syria, Hizbollah-backed regime forces gained ground in the Khaldiyeh district in Homs after ousting rebels in fierce clashes in the flashpoint city, the Observatory said.

State television quoted a military source as saying that regime forces were in control of all the area around the mosque.

Rebels were putting up “fierce resistance” amid “very intense clashes”.

Militant network the Syrian Revolution General Commission (SRGC) also reported heavy fighting in the district, which has been besieged by regime forces for more than a year.

“Khaldiyeh is being targeted by an uninterrupted heavy bombardment, and on the ground there is fierce fighting between (rebel) Free Syrian Army fighters and regime forces backed by Lebanon’s Hizbollah trying to take the district,” a statement said.

Syria’s official press said the army was now back in control of most of Khaldiyeh, while an activist on the ground told AFP that the sector was being shelled “day and night”.

The SRGC and the Observatory both said the Old City district of Homs – dubbed the “capital of the revolution” against President Bashar al-Assad – was being pummelled too.

The latest regime offensive on besieged rebel-held neighbourhoods of Homs is now in its fourth week.

Government forces are seeking to secure another victory like the one in Qusayr near the border with Lebanon in June, when the Shiite militant group Hizbollah was key in retaking the strategic town.

Hizbollah, the strongest military force in Lebanon and a staunch ally of the Assad regime, has had its military wing blacklisted by the European Union as a terrorist group.

The 28-month-old civil war in Syria has killed a total of more than 100,000 people and left million of refugees, without any peace settlement in sight.

In New York, a UN spokeswoman said the world body’s chief Ban Ki-moon is to review an accord struck with Syria on investigating the use of chemical weapons before any details are announced.

Ban will meet in New York on Monday with the two envoys who struck the accord, spokeswoman Morana Song told AFP.

The United Nations and Syrian government announced in a joint statement issued late Friday that an accord had been reached “on the way forward” in the investigation, following a Damascus visit this week by two UN envoys.