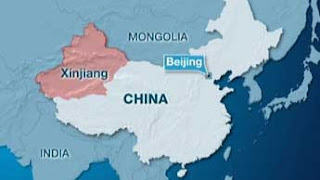 When the dust and "allahu ackbars" had settled, 27 people in total are dead.

Once again we see proof that no country on earth is left untouched by the violence of the prophet Mohammed.

It was the latest spasm of violence to hit the troubled western region, which is about twice the size of Turkey and is home to around nine million members of the mostly Muslim Uighur ethnic minority.

“Seventeen people had been killed... before police opened fire and shot dead 10 rioters,” it said.

The mobs were also “stabbing at people and setting fire to police cars”, the report said.

Nine police or security guards and eight civilians were killed before police opened fire, the report said, adding that three other people were taken to hospital with injuries.

The reason for the violence was not immediately clear, and police in Turpan refused to comment when contacted by AFP.

Many of Xinjiang's Uighur community complain of religious and cultural repression by Chinese authorities, and the region is regularly hit by unrest.

Dilshat Rexit, a spokesman for the World Uyghur Congress, an exile group branded by Beijing as “separatist”, said “continued repression and provocation is the cause of conflict”. His comment came in a statement sent to AFP after news of the violence emerged.

China reported that 21 people died in clashes between police and locals in the region in April, which the government said were caused by “terrorists”.

Chinese authorities have often blamed such violence in the region on “terrorists”, and a court in Xinjiang recently jailed nine people for “religious extremism”.

China said clashes in 2011 that killed 19 were organised by terrorists who trained in Pakistan and were part of a separatist movement seeking an independent state in Xinjiang.

Uighur rights groups have dismissed the claims of terrorism, citing economic inequality and religious repression as causes of unrest.

Those clashes lead to a major security push in the region, which rights groups have said led to intense monitoring of Uighurs by security forces.

A specialised anti-terrorism unit of the People's Liberation Army carried out drills in April, according to a previous report by the PLA Daily.

The region saw more than half of China's trials for the charge of “endangering state security” last year, but is home to less than two per cent of the country's population, suggesting “ethnic discrimination”, the Dui Hua Foundation advocacy group said.

Beijing has launched a stream of high-profile investment projects in an attempt to boost economic growth in the relatively poor region, which has rich reserves of coal and gas.

According to official figures, 46 per cent of Xinjiang's population are Uighur, while another 39 per cent are Han Chinese, after millions from the majority group moved there in recent decades in search of jobs.

The Han settlement drive, which has been mirrored in Tibet, has fostered tensions with the existing community.

The Uighurs, who mostly follow Sunni Islam, speak a Turkic language and have ethnic links with groups in neighbouring countries including Russia, Kazakhstan and Kyrgyzstan.

Xinjiang's regional government was not available for comment on Wednesday's violence.

China's foreign ministry spokeswoman Hua Chunying said at a regular briefing that she was aware of reports, without giving further information.

Information about unrest in Xinjiang is tightly controlled by China's ruling Communist Party, and the government blocked Internet access across the region for several months following the clashes in 2009.

Posted by Holger Awakens at 4:45 AM