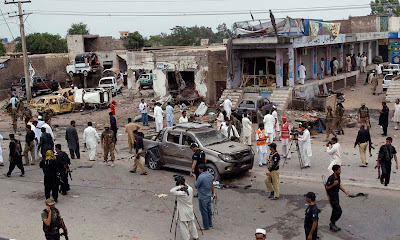 It's the weekend in Pakistan.  That means blood running in the streets at the hands of the Taliban, al Qaeda and about 42 other islamic terror groups.

Same shit, same day of the weekend.  It never ends.


PESHAWAR: At least 17 persons, including three children, were killed and more than 46 injured in a blast on Sunday near Peshawar's Badaber police station targeting a convoy of security vehicles.

According to latest reports, Lady Reading Hospital sources confirmed that 17 people had died in the blast whereas 45 others were injured.

The dead also included one woman and four children.

42 of the wounded were civilians whereas three FC personnel and an SPO were also among the injured.

Deputy Commissioner Peshawar, Jawed Marwat, told media persons that 16 people, icluding a woman and children, were killed and 25 others injured in the blast.

Khyber Pakhtunkhwa's Inspector General of Police, Ehsan Ghani, had also confirmed the deaths of 13 people in the car bomb targeting a convoy of the Frontier Corps

He added that the three vehicles, which comprised of the targeted convoy, were destroyed.

SP Rural Shafiullah Khan told Dawn.com that the FC convoy was moving on Kohat road when a vehicle parked near a CNG station detonated.

He added that several security personnel were injured in the attack but no one was killed.

It was not clear as yet whether the explosion was remotely detonated or carried out by a suicide bomber.

Gunfiring was also heard after the blast.

The victims were shifted to the Lady Reading Hospital where an emergency was imposed.

A market and ten vehicles situated in the blast vicinity were destroyed in the explosion.

Security forces cordoned off the area and began a search operation as investigations into the incident went underway.

He also prayed for the early recovery of those injured in the blast.

Earlier Khyber Pakhtunkhwa's Information Minister Shaukat Yousufzai had confirmed that nine persons, including three children were killed in the blast whereas more than 20 were wounded.

In another incident three security personnel were killed and ten others injured in an attack on a security forces' convoy in North Waziristan tribal region's Miranshah area on Sunday.

Posted by Holger Awakens at 7:12 AM