48 Dead In Nigeria When Muslims Attack Christians, Military Gets Involved 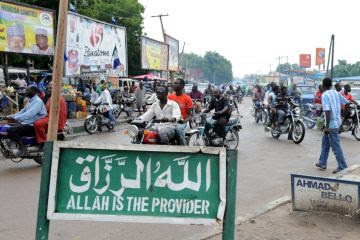 You know, you would think that a media outlet in India would have the balls to call a spade a spade...after all of the death and heartache brought upon the Hindus of India by the plague of Islam, you'd think that Times of India would have the sense and the balls to call the attacks in Nigeria what they are - Muslims attacking and killing Christians but no...hell no....look at the title of the article below.


PAUL OHIA ABUJA: Raids by gunmen in central Nigeria and gun battles between soldiers and attackers have killed at least 48 people, including secondary school students, and left over 100 homes burnt.


A total of 48 people were murdered when attackers besieged three villages in Plateau state on Thursday, captain Salisu Mustapha, spokesman of the military in the state, said on Friday.

According to him, 28 villagers and 20 assailants died during the attack on residents and counter-attack by soldiers respectively.

The unknown attackers laid siege on the villages of Bolgang, Magama and Karkashi shooting indiscriminately resulting in the mass casualties, while the unhurt residents fled their homes to safety, Nigerian newspaper 'The Gurdian' quoted an eyewitness as saying.

Those killed at Magama are mostly children and elderly people.

Over 100 houses were also burnt by the rampaging attackers, a local official said.

The crisis, which was more of an attack, had the mainly Muslim Fulani ethnic group unleashing mayhem on the native Christian Taroks tribe in the early hours of Thursday morning, leaving many dead including secondary school students, the report said.

The assailants were cattle thieves who have become notorious for stealing livestocks from some community of herdsmen in the state, he said.

Similar violence had led to thousands of deaths since 1999 in the state.

Posted by Holger Awakens at 1:44 PM