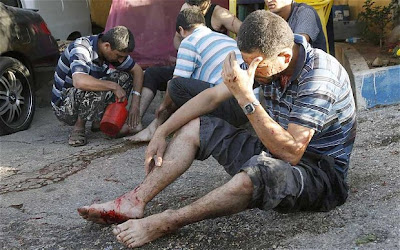 You absolutely gotta love this - Islamic terrorist rebels in Syria are now lobbing rockets INTO Lebanon and two of their Grad rockets, for the first time, actually hit the capital of Beirut and those two rockets landed right in the heart of Hezbollah run southern Beirut wounding four people.


"Two Grad rockets hit the southern suburbs of Beirut. One rocket struck a car showroom where four people were wounded and vehicles were damaged," the source told AFP.

It was the first time the Lebanese capital's southern suburbs have been targeted during the two-year-old conflict in neighbouring Syria, where Hizbollah has thrown its military might into the regime's fight against rebels seeking to topple President Bashar al-Assad.

"I say to all the honourable people, to the mujahideen, to the heroes: I have always promised you a victory and now I pledge to you a new one" in Syria, he said at a ceremony marking the 13th anniversary of Israel's military withdrawal from Lebanon.

Nasrallah said Hizbollah would always stand by its ally Assad and his regime, stressing that its own interests were at stake.

The fighting in Lebanon has already spilt over into the country's second city, the northern port of Tripoli, where 30 people have been killed in a week of clashes between pro-Assad Alawites and pro-rebel Sunni Muslims.

Posted by Holger Awakens at 3:00 PM