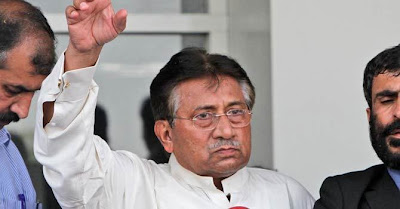 The Taliban have issued a fresh new death threat on the former Prime Minister and for those that think it is just an idle threat...well, remember what happened to Benazir Bhutto returned to Pakistan.


PESHAWAR: The Pakistani Taliban on Sunday issued a fresh threat to assassinate former military ruler Pervez Musharraf, who is currently facing a barrage of legal cases in police custody.

The retired general has been detained in his farmhouse on the edge of the capital Islamabad since April 19 on charges of conspiracy to murder former premier Benazir Bhutto, sacking of judges when he imposed emergency rule in 2007, and the 2006 death of a Baloch rebel leader.

Before his arrival in March, Tehreek-e-Taliban Pakistan (TTP) threatened to kill him for his alliance in the US-led “war on terror” and attempts to clamp down on militants, when he was in power.

TTP spokesman Ehsanullah Ehsan on Sunday issued a fresh warning in a video message posted on Taliban website Umar Media, saying “Soon we will punish this Satan (devil) to death for his wicked deed”.

Musharraf went to the top of the Taliban hit list after ordering the army in 2007 to storm the Red Mosque in Islamabad, where radicals were holed up. The operation left more than 100 people dead and opened the floodgates to attacks in Pakistan.

“From Balochistan to Waziristan, Musharraf threw this country in blood and fire, he is the killer of hundreds of innocent students of Lal Masjid (red Mosque),” Ehsan said.

A Pakistani court on Wednesday refused bail to Musharraf over the detention of judges.

The ruling came two days after a court granted him bail over the murder of former prime minister Benazir Bhutto, who was killed in a gun and bomb attack in 2007.

Posted by Holger Awakens at 6:14 AM

He's reaping what he sowed. Lest not forget that he supported the Taliban back in the early 90's....

After the collapse of the fractious Afghan government, Musharraf assisted General Babar and the Inter-Services Intelligence (ISI) in devising a policy of supporting the newly formed Taliban in the Afghan civil war against the Northern Alliance government.