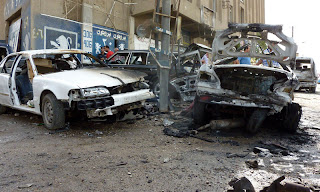 Al Qaeda in Iraq and other Sunni terror groups across Iraq continued their rampage across Iraq today killing a total of 11 people, bringing the weekly death toll in Iraq to 166 from what can only be described as Hell on earth.

It appears that al Qaeda in Iraq, after all of these years, is going to finally get what they wanted....a full scale Muslim sectarian civil war in the country.

If that happens, the streets will be red with blood.


BAGHDAD: Attacks in Iraq, including car bombs in Baghdad, killed 11 people on Thursday, the latest in a surge of violence that has left 166 dead in a week and sparked fears of all-out sectarian conflict.

The UN has called for Iraq's leaders to urgently hold talks to resolve wide-ranging political disputes that have been linked to the surge in unrest.

But the government's public response has thus far been limited to speeches, a shakeup of senior security officers and announcing a series of vague new measures relating to security.

Amid all the statements and pronouncements, the violence has intensified.

On Thursday morning, a vehicle rigged with explosives went off in northeast Baghdad, killing four people and wounding a dozen more, while two more car bombs in the centre of the capital killed two and wounded 14.

Two border policemen were also ambushed along the main Iraq-Jordan highway and shot dead, while three policemen were killed in an early morning suicide car bombing in the main northern city of Mosul.

Violence a day earlier, including a bombing against a bridal party in south Baghdad, killed 28 people. Security forces on Thursday barred journalists from attending the funeral for victims of the wedding party assault.

The latest attacks took to more than 580 the number of people killed in May, with more than 1,000 having died in less than two months, according to AFP figures based on reports by security and medical sources.

Iraq has seen a heightened level of violence since the beginning of the year, coinciding with rising discontent among the Sunni Arab minority that erupted into protests in late December.

Members of the minority, which ruled the country from its establishment after World War I until Saddam Hussein's overthrow by US-led forces in 2003, accuse the Shia-led government of marginalising and targeting their community.

Analysts say government policies that have disenfranchised Sunnis have given militant groups in Iraq both fuel and room to manoeuvre among the disillusioned community.

The government has made some concessions aimed at placating protesters and Sunnis in general, but underlying issues have yet to be addressed.

UN envoy Martin Kobler called on Tuesday for the country's leaders to meet to resolve long-running political crises that have paralysed the government and been blamed for its inability to halt the bloodshed, but various efforts to bring top politicians together since late 2011 have all failed.

Although the violence in Iraq has fallen from its peak at the height of the sectarian conflict in 2006 and 2007, when death tolls could run to well over 1,000 people per month, the body count has begun to rise again.

On Tuesday, the cabinet announced a series of measures related to security.

These included “pursuing all kinds of militias,” calling for a meeting of political powers to discuss developments, providing unspecified support to security agencies, and warning the media against inciting sectarian strife.

It was unclear what if any immediate impact they could have on the worsening security situation.

Posted by Holger Awakens at 4:14 AM