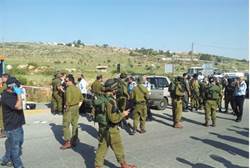 
An Arab terrorist armed with a knife stabbed an Israeli at the Tapuach junction in Shomron (Samaria) on Tuesday morning.

Initial reports indicate that the terrorist stabbed the victim, identified as Evyatar Boruvsky, in the upper body, wounding him critically.

The terrorist then grabbed his gun and fired at the Border Police who were stationed in the area. Border Police officers fired back, wounding the perpetrator.

Magen David Adom teams arrived at the scene and tried to revive the 32-year-old Israeli father of five from the Yitzhar, but had to pronounce him dead on the spot.

The Tapuach junction in Samaria has known many attacks. The last one stabbing attack occurred in mid-January, when a terrorist stabbed a 17-year-old-boy near the checkpoint.

A Border Police force chased the attacker and managed to stop him from escaping the scene of the attack. The terrorist, a resident of Ramallah in his 20s, was turned over tosecurity forces for questioning.

Posted by Holger Awakens at 1:31 AM