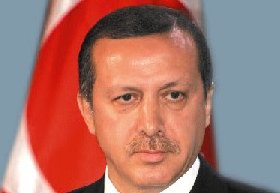 This really does boil my blood but I'll say this....let's see who has the last laugh, Turkey.

The story comes from Radical Islam.

Crowning Erdogan as the New King of Islamists


Israeli Prime Minister Netanyahu’s apology to Turkey for the deaths of its citizens during the 2010 flotilla raid misses the point. The tension with Turkey was never really about the operation. It was about making Israel bow to Turkey, crowning Prime Minister Erdogan as the new king of the Islamists.

“Israel apologized to Turkey. Dear prime minister, we are grateful that you let our country experience this pride,” says billboards that have been set up in Ankara celebrating the Israeli apology.

The actions taken by the Turkish government since Netanyahu’s apology show that its goal is submission, not reconciliation.

Erdogan is extending his time in the spotlight by demanding that Israel pay $1 million to each of the nine casualties’ families, ten times the amount Israel has offered. He isn’t yet dropping his case against the Israeli generals involved in the raid, nor is he fully restoring diplomatic ties with Israel. And he’s announced that he will visit the Hamas-controlled Gaza Strip in what is a thinly-concealed victory lap.

The aspirations of the Turkish government were frankly stated by Foreign Minister Davutoglu. Last May, he said, “We will manage the wave of change in the Middle East. Just as the ideal we have in our minds about Turkey, we have an ideal of a new Middle East. We will be the leader and the spokesperson of a new peaceful order, no matter what they say.”

The Turkish government has announced its intention to build a mega-mosque in Istanbul that will have the tallest minarets in the world and can “be seen from every corner of the Bosphorus.” This is a reflection of its grand vision of dominance.

Erdogan was rated as the second most influential Muslim leader of 2012, only behind Saudi King Abdullah. Despite his reputation as a “moderate,” Erdogan has said that Hamas is a “resistance” group, not a terrorist group. He has won the admiration of Hamas leader Khaled Mashaal, who said, “Turkey’s support for the people of Syria and Palestine is unforgettable. My brother Erdogan, thank goodness God gave you so much. And you deserve it. You are also a leader in the Muslim world.”

The Turkish government isn’t “moderate” and trying to position itself to help bring peace in the Middle East. Instead, its top officials are promoting the themes against Israel’s right to exist that sustain the conflict.

Erdogan recently said that “Islamophobia” and Zionism are crimes against humanity on par with fascism and anti-Semitism. He also called Israel a “terrorist state” during the latest round of fighting with Hamas. This rhetoric isn’t as inflammatory as Iran’s pledges to wipe Israel off the map, but the point is the same. A “terrorist state” should not exist, nor does a philosophy that is equivalent to fascism.

The Turkish government has adopted the Muslim Brotherhood doctrine of “gradualism.” As the ruling AKP party is strengthened, it has more room to implement its Islamist agenda.

In July, the government proposed limits on freedom of speech for the sake of “public morality,” “national security,” “public order” and to “prevent pro-war propaganda, discriminations and hate.” Turkey is now believed to have “more journalists in detention than any other state in the world.” Pianist Fazil Say, , a critic of Erdogan’s, was arrested for insulting “religious values.” A human rights organization defending him was charged with “denigration of the state.”

The increased Islamization of Turkey corresponds with increased discrimination against Christians and Jews and hostility to the U.S. and Israel. The Turkish Association of Protestant Christians complains of a “root of intolerance” resulting in anti-Christian discrimination.

A 2009 poll found that 55% of Turks do not want non-Muslims to have positions in justice or security. About 44% don’t want to be treated by Christian or Jewish doctors. About 57% are against having atheists as neighbors, while 42% feel that way about Jews and 35% about Christians. Interestingly, 54% don’t want “Shariah supporters” as their neighbors, which may be a reference to Salafists.

Nonetheless, the statistics and aforementioned facts show that the Turkish government is transitioning the country from a secular identity to an Islamist one. And Turkey is increasingly looking to export its ideology, whether it is in Syria through rebel forces or the U.S. through the Fethullah Gulen network and outreach to Native American tribes.

The political success of Erdogan is alarming. One of the best advantages the West enjoys in the ideological war is that Islamists usually lose much of their support once they gain power. The most recent entry in this pattern is the Muslim Brotherhood in Egypt. On the other hand, the popularity of the AKP and Erdogan has increased in Turkey since they came into power.

Israel may stand strong against Iran, Hamas and the Muslim Brotherhood, but it caved to Turkey. The apology and the West’s reluctance to confront Turkey sends the signal that Erdogan is the leader of the region.

Posted by Holger Awakens at 3:26 PM