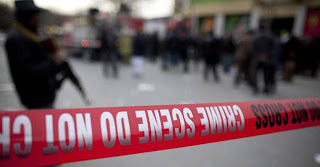 Today the Taliban unleashed a bit of an unholy wave of attacks across Afghanistan with several suicide bombing attacks - the one that probably would have done the most damage was foiled when Afghan security forces shot dead the suicide bomber before he could set off the huge explosives in his vehicle.

The attacker in Kabul was armed with a suicide vest and his SUV was full of explosives, but police opened fire when he tired to penetrate deeper into the capital’s diplomatic enclave of Wazir Akbar Khan, the officials said.

In the day’s first attack, a suicide bomber rammed an explosives-laden car into a spy agency facility in the town of Jalalabad, 150 kilometres east of Kabul.

It was followed by a similar attack on a police base in Puli Alam, 70 kilometres south of the capital, officials said.

Taliban spokesman Zabihullah Mujahid claimed responsibility for the attacks in Puli Alam and Jalalabad, but denied that the militant group was involved in the foiled attack in Kabul.

Authorities had earlier said that two would-be suicide bombers were killed in Kabul. But city police chief Mohammad Ayoub Salangi said only one attacker was involved, dismissing local reports that a second bomber had managed to escape.

“We have intelligence about this. The bomber was shot dead and his car bomb is defused. It’s over now,” Salangi told AFP.

An AFP photographer at the scene saw a young man laying dead in a pool of blood next to his bullet-ridden car on the side of the road near a construction site. The man was shot in the head.

The same construction site was overrun by insurgents as part of a coordinated attack in Kabul and several other provinces in April 2012.

Fifty one people, 36 of them insurgents, were killed in those attacks, which besides Kabul hit several other cities.

The Taliban are the main group behind suicide bombings in Afghanistan in a long-running insurgency aimed at toppling the Western-backed government in Kabul.

In Jalalabad, police spokesman Hazrat Hussain Mashriqiwal said the bomber rammed his sedan car into the gates of the walled compound of a National Directorate of Security branch and detonated his bombs.

“There was a suicide car bombing in the intelligence facility in city district two. Two intelligence workers were martyred and three others were wounded,” the police spokesman said.

Police in Puli Alam, the capital of Logar province, said the attack there hit the gates of a police base along the highway leading to Kabul and killed one police officer.

Logar police chief Abdul Saboor Nasrati said the bombing was carried out in a van and caused “a massive explosion” that broke glass and caused damage to nearby homes.

The Taliban have waged an 11-year insurgency against the Kabul government since being ousted from power in a US-led invasion in 2001.

The United States and Nato have around 100,000 troops in Afghanistan, but the vast majority of them will leave next year, with Afghan forces progressively taking over.

Posted by Holger Awakens at 6:08 AM