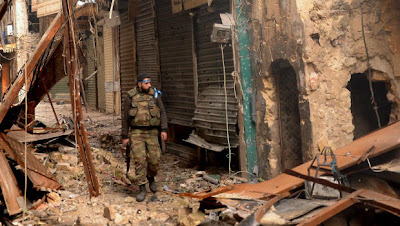 Aleppo in Syria has been the scene of huge bloodshed in the past number of months as the Syrian rebels and Assad's troops have gone back and forth for control of the city - well, in the past 24 hours, both forces have fought over control of a police academy in Aleppo and the death toll so far is staggering.  According to reports, Syrian troop losses are at 30 and the rebels have had 23 killed.

Must be a helluva police academy, huh?


Over 50 killed in battle for Syria police academy

BEIRUT: At least 30 Syrian troops and 23 rebels were killed over the past 24 hours in fierce clashes for control of a police academy in the northern Aleppo province, a watchdog said on Monday.

The Syrian Observatory for Human Rights also reported that rebels shot down a regime helicopter near a military base elsewhere in the north of the province as insurgents pressed on with attacks on the police academy in the west.

At least 53 combatants, 23 rebels including a battalion commander and 30 Syrian troops, were killed over the past 24 hours in the fighting outside the town of Khan Assal, the Britain-based Observatory said.

It said rebels took control of a building where troops were entrenched as warplanes tried to repel them and “took hostage dozens of pro-regime militants.”

But the pro-regime Al-Watan newspaper said Monday that “members of the police academy rebuffed the intensive attacks of armed men for the second consecutive day, inflicting heavy losses on them with artillery.”

The police academy is one of the last regime bastions in the west of Aleppo province.

The chopper was shot down near Minnigh military airport, which rebels have been trying to stop for months, “and burst into flames after it was hit,” the Observatory said.

A local resident confirmed to AFP that “the helicopter was shot down while trying to land” at the strategic airbase, located in the north of the province.

Also on Monday regime warplanes bombarded the southwestern and eastern outskirts of Damascus in a protracted bid to dislodge rebels from their rear bases, killing 10 civilians including two children, the Observatory said.

Inside the capital, troops shelled rebel strongholds in the east and south, killing two civilians including a young girl, and another girl was killed in mortar fire in clashes that broke out near the Yarmuk Palestinian refugee camp.

In the northwestern province of Idlib at least eight civilians were killed in air raids on villages in Jabal Zawiya and shelling on the rebel-held village of Khirbet al-Joz on the Turkish border.

Fighter jets also raided towns in the southern province of Daraa, cradle of the uprising against President Bashar al-Assad that broke out in March 2011 and has left 70,000 dead, according to the United Nations.

In the mainly Kurdish province of Hasake, the Al-Nusra Front and other rebels seized Tal Hamis after several days of heavy fighting and regime shelling that forced most of the town’s residents to flee, the Observatory said.

The watchdog, which relies on a vast network of activists on the ground and medics, said at least 92 people were killed in violence across Syria on Monday.

Posted by Holger Awakens at 2:25 PM